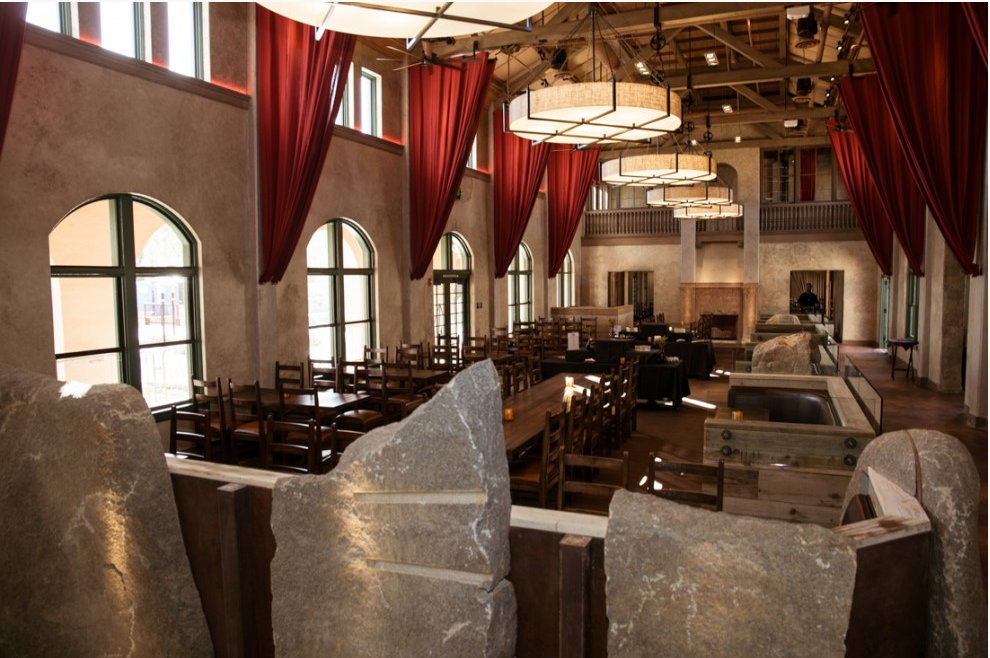 SAN DIEGO — Stone Brewing Co. is thrilled to announce that its second decidedly eclectic restaurant, Stone Brewing World Bistro & Gardens — Liberty Station, is (finally!) open in what use to be the Naval Training Center in the Point Loma neighborhood of San Diego.

The brewery restaurant opened its doors May 15 and recently finished construction of its garden, marking the completion of the entire facility.

“This project was a monster, however, we were able to bring to fruition an epic concept that we are really proud of,” said Stone CEO and Co-founder Greg Koch. “We have created a restaurant and brewery that offers our fans and guests a truly unique experience unlike any other.”

“We’ve anticipated the opening of this restaurant for quite a while, and I’m glad we finally made it to the finish line” said Stone President and Co-founder Steve Wagner. “It has been rewarding to see our fans and new guests enjoy the various aspects of the restaurant, and the terrific new beers we’ve brewed on site.”

Similar to Stone Brewing World Bistro & Gardens — Escondido, the restaurant offers a menu employing the company’s well-known farm-to-table ethos, focusing heavily on locally grown, organic produce from farms around Southern California, including the company’s own Escondido-based Stone Farms. Executive Chef Tausha Lopez, who has been with Stone since the company’s first restaurant opened in 2006, prepares signature classics as well as new dishes that showcase the creative artisanal approach to world-inspired cuisine that Stone is known for.

The 55,000-square-foot indoor and outdoor facility seats more than 800 guests and has many unique areas to discover, including an on-site brewery, two bocce ball courts, a movie courtyard, expansive garden patio, private banquet rooms and Stone Company Store — Liberty Station. The brewery is equipped with a 10-barrel brewhouse, fashioned by San Diego County’s own Premier Stainless Systems, and six 20-barrel fermenters that will be used to produce small-batch, one-off beers for both restaurants, special events and Stone Company Store growler fills. Longtime Stone brewer Kris Ketcham oversees brewing operations and will have help from a list of rotating brewers joining him from the brewing company’s main brewery in Escondido, CA.

“I’ve been putting in long hours since opening, but I really have one of the best brewery jobs ever,” Ketcham said. “I can brew unique beers that illustrate how creative we can be here at Stone. With our smaller brewhouse, I get to brew beers that might not otherwise be a part of Stone’s portfolio.”

“Kris was chosen to manage the brewery operations at Stone Brewing World Bistro & Gardens — Liberty Station because of his passion, creativity and great work ethic,” said Stone Brewmaster Mitch Steele. “He’s been with Stone for more than eight years, and in that time he’s worked his way up from early positions as delivery driver and bottling line operator to brewing manager. We expect great things from Kris, and from the new beers he’s already brewed there, we can tell he’s up for the job.”

The exterior bocce courtyard directly adjacent to the main dining room, main bar, small banquet room and large banquet room allows guests to engage in some friendly competition while savoring their favorite craft beer. Just on the other side of the large banquet room is the movie courtyard. Equipped with its own 12-tap bar, the inviting outdoor area will host guests for special and private events, including Stone Movie Nights, a summer tradition being carried over from Stone Brewing World Bistro & Gardens — Escondido, that is scheduled to begin later this summer.

The 30,000-square-foot garden area seats up to 200 people and integrates evening fire features, a flowing pond with multiple waterfall elements, and bold use of reclaimed wood, huge boulders, steel, concrete and plant life. The addition of the main outdoor bar with its 30 taps ensures guests won’t have to make the trek inside the restaurant to get served, allowing more time for them to relax while taking in San Diego’s great year-round weather.

Situated towards the rear of the restaurant, Stone Company Store — Liberty Station is open seven days a week for purchases of merchandise, bottled beer, kegs, growlers and growler fills.