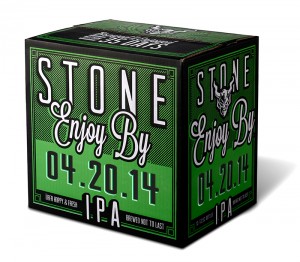 ESCONDIDO, CA (March 17, 2014) — On Friday, March 14, a devastatingly dank and ├╝ber-fresh Stone Brewing Co. beer, Stone Enjoy By 04.20.14 IPA, was bottled, kegged and loaded on refrigerated trucks bound for IPA enthusiasts nationwide. For the first time ever, Stone is making the ultra-hoppy brew available in limited quantity to retailers (not dispensaries) in 40 of the states where Stone beers are sold.

Stone Enjoy By 04.20.14 IPA features a massive profile of the resinous green buds (hops, not the other green buds), coaxed from a unique blend of 13 different hop varieties added throughout the brewing process. When combined, the deluge of hops creates nuances of peaches and tropical fruit qualities that are evident in the aroma, while the taste has an overwhelmingly sweet bitterness.

Since Stone Enjoy By IPA’s initial debut in late 2012, the beer has proved to be a groundbreaking way to enjoy fresh beer and has changed the way Stone and its distributors work together to deliver beer to increasingly fervent craft beer enthusiasts. The “Enjoy By” date printed on each bottle reflects the date, precisely 35 days after bottling, by which the beer must be consumed. And Stone continues to make sure it will be. In the unlikely event that any hop-potent beer remains on the shelves on April 21, it will immediately be removed.

“This is the most ambitious Stone Enjoy By IPA release to date,” said Stone President and Co-founder Steve Wagner. “This beer continues to be a fan favorite, so we are excited that it’s being offered in a record number of states. We encourage fans who want future batches of the beer to vote through their social media accounts and online.”

Stone is giving fans the power to choose where the next batch of Stone Enjoy By IPA will go by voting with the hashtags #EnjoyBy [five-digit ZIP code] on Twitter andInstagram, or by checking in with Untappd and adding a ZIP code to the notes section. Fans may also visit the newly revamped Stone Enjoy By IPA website and a new mobile-friendly online page once a day per device to vote with their ZIP code. Based on total interactions, Stone guarantees to roll out future batches of the beer to the locations that are most vocal about their desire to savor more Stone Enjoy By IPA.

How can one find this incredibly dank beer? Visit www.stonebrewing.com/enjoyby and use the interactive map to find exactly which retailers, restaurants and bars are carrying the beer in bottles or on draft.

Drink extra-super-dank-and-tasty Stone Enjoy By 04.20.14 IPA well before its shelf life to maximize the pungent glory that this beautiful, intense hop profile provides.