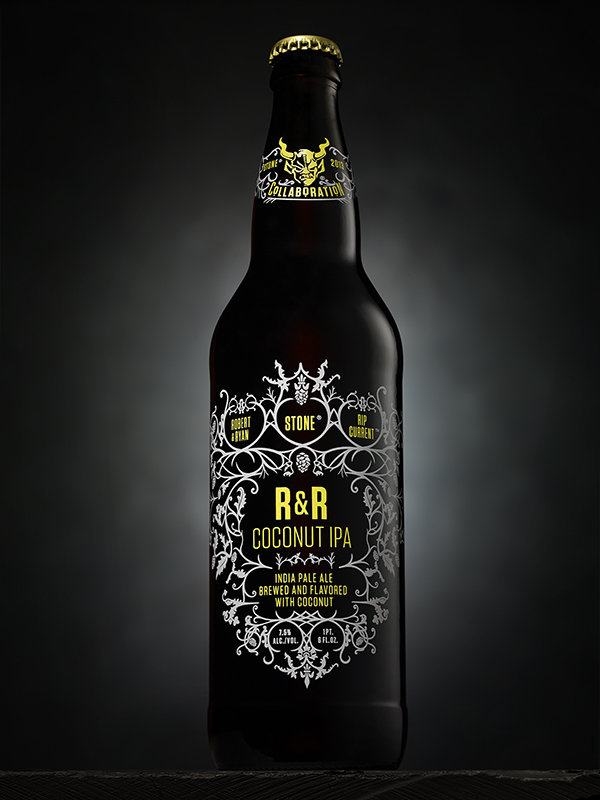 Earlier this year, Masterson and Reschan’s homebrewed Coconut IPA was entered into Stone’s 2013 Homebrew Competition & AHA Rally at Stone Brewing World Bistro & Gardens — Escondido. Thirty participants entered the competition with hopes of winning the opportunity to have their recipe professionally brewed at Stone and distributed across the US. After attendees submitted votes to narrow the field, an esteemed judging panel, consisting of Stone CEO & Co-founder Greg Koch, President & Co-founder Steve Wagner, Brewmaster Mitch Steele, Craft Beer Ambassador “Dr.” Bill Sysak and several Stone brewers, selected Masterson and Reschan’s beer. Why? Because, it was very creative and amazingly tasty!
Expect a strong coconut aroma and distinct coconut flavor from the beer. Three pounds of lightly toasted coconut per barrel was added to the whirlpool and post dry hop — 280 pounds total. To achieve the final glorious result, collaborators Paul Sangster and Guy Shobe of Rip Current Brewing Company offered alternatively creative hopping suggestions and their pilot system to experiment on. The team was able to brew test batches utilizing proposed hop combinations and finally dialed in a combination that met the satisfaction of all five collaborators. Ultimately, six hop varieties were used to attain the bright flavors of tropical fruit that the homebrew version originally delivered. Overall, Robert Masterson & Ryan Reschan / Rip Current / Stone R&R Coconut IPA is the perfect beer to enjoy in the summer sun, providing a refreshing balance of coconut and tropical fruit with a smooth, dry, hoppy, bitter finish. The beer should be enjoyed before the, well, “Enjoy By” date on the bottle to maximize the coconut and hop aromas and flavors.

Appearance: Pours deep gold and clear with a nice cream-colored head.
Aroma: Predominantly coconut, along with mild fruity fermentation esters, tropical fruit and stone fruit hop flavors.
Taste: Coconut up front, mixed with tropical fruit and stone fruit hop notes. Creamy malt flavors sneak in mid-palate, and the finish is bitter, dry and hoppy with lingering coconut.
Palate: Smooth and creamy, with a dry finish and nice lingering bitterness.
Overall: A very unique blend of flavors comes through on this beer. The primary flavor is coconut, and its intensity was achieved by two additions, one in the whirlpool and the other post dry hop. The selected hop varieties add subtle tropical fruit and berry notes that blend well with the coconut. There is no doubt this is a big IPA, but with a very interesting twist!