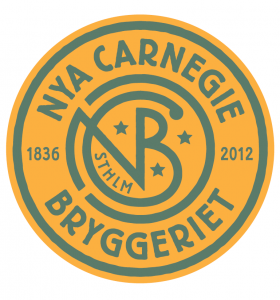 Stockholm, Sweden – Nya Carnegiebryggeriet is opening — a new and modern craft brewery in the F-marked Luma factory in Hammarby Sj├Âstad, with its own restaurant. Behind the project are Carlsberg Sweden and Brooklyn Brewery, as well as private investors.

Nya Carnegiebryggeriet is a revival of the Carnegie Brewery, a 178-year-old brand that is the oldest trademark in Sweden. It is thus rooted in Sweden’s brewing history but dedicated to the new spirit of innovation that is sweeping the world of beer.

“Since our company’s founding, we’ve always looked outward. Steve Hindy and I both discovered beer while traveling abroad. The Ottaways grew up in far-flung places around the globe. And in Sweden we’ve found a real community that has welcomed us with open arms. It’s only natural that we partner with our friends here to create a new chapter in brewing,” says Garrett Oliver.

The new brewery is operated by a subsidiary of Brooklyn Brewery, one of America’s top 10 craft breweries. Nya Carnegiebryggeriet is the very first overseas joint venture with an American brewery, an exciting example of how far beer has come in the U.S. and the world. Brooklyn beers are distributed by Carlsberg throughout Scandinavia. The Swedish-based staff of New Carnegie has been hired by and trained at Brooklyn Brewery under Garrett Oliver. They are brewmaster Anders Wendler, general manager Fredrik Vogel, and brewers Josefine Karlsson, Christoffer Thurgesson, and Karl Fornarve.

Wendler and Oliver presented the brewery’s five inaugural beers. The beers are Nya Carnegie Kellerbier, Nya Carnegie Amber, Nya Carnegie Primus Lux, Nya Carnegie Lumens in Tenebris and Nya Carnegie J.A.C.K. (a sessionable IPA that uses the first letter of our brewer’s names in Stockholm). Also on tap are Brooklyn Lager, Brooklyn Hammarby Syndrome and Carnegie Porter 175. Moreover, there will be a real ale tap and a number of different bottle beers, primarily from different Swedish craft breweries, and also a selection of vintage bottles.

“For me beer is both my job and my hobby,” said Wendler, a homebrewer in his spare time. “Therefore it feels amazing to be part of creating Nya Carnegiebryggeriet, that we hope will be a beer temple for everyone who wants to explore the world of beer.”

Nya Carnegiebryggeriet will make small scale quality beer that is both tasteful and innovative. The beer will be available both as draught and in bottles and will be sold at the nearest Systembolag, in selected restaurants and bars in Stockholm, Sweden, and the world.

There is also a restaurant in the premises of the brewery, where the combination of beer and food is in focus. The restaurant is run by restaurant manager Tobias Nordahl and head chef Billy White, who previously worked at Mathias Dahlgrens Matbaren in Stockholm and F├ñviken in J├ñmtland, both with substantial knowledge from the gastronomic scene. In Hammarby Sj├Âstad they will be creating something completely new in the old F-marked Luma building by the water, next to the brewery.

— “Restaurant Nya Carnegiebryggeriet is an amazing project. What inspired me the most was meeting with the brewers and talking with Brewmaster Oliver about his philosophy of pairing beer with food. Their knowledge of craft really rubbed off. In the kitchen, we are striving to put into action the ideas from Oliver’s book, Brewmaster’s Table,” says Billy White, head chef at Nya Carnegiebryggeriet.

The restaurant and the brewery will be open to the public on April 9th. Visit www.nycarnegiebryggeriet.se for more information and booking.

More about the first beers

Example of dishes from the restaurant