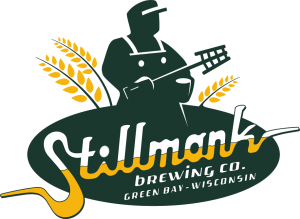 Green Bay, Wis. — Stillmank Brewing Company has opened their taproom this past Wednesday on Green Bay’s east side (215 North Henry Street, Green Bay). This is an incredible accomplishment for a brewer that had just purchased the abandoned warehouse this past April (as we had previously reported). Stillmank began production in the facility in early August, and has now added a 2014 GABF bronze medal to their impressive collection of awards for their flagship brand “Wisco Disco”.

This new facility will allow Stillmank to begin production on a number of brands to compliment Wisco Disco. Plans currently include 16 ounce line extensions for “The Bee’s Knees” a honey rye ale, and “Super Kind, Green Bay IPA”. Stillmank also plans to brew a number of draft only options starting with a coffee porter called “Perky Porter” that will be available through February of 2015.

“Many of the brands I brew fall outside of traditional stylistic form. Most amber ales do not include lactose, and who has heard of a honey rye ale?? But that is what makes it fun, for me it is all about finding new ways to interpret classic styles and make our own version. I believe that is true craft.” — Brad Stillmank (Brewer Owner)

Stillmank Brewing is one of a growing number of keg and can only operations. Many of their brands can be difficult to find as well, if you live outside North Eastern Wisconsin. The company has substantial growth in the past couple years, however they are still by comparison very small. “This is just the start, we are very fortunate to live in a town that can really get behind a small local idea, and make it huge. I owe a huge thank you to all those that put Wisco on tap, or on their shelves at retail, giving a new (and kind of unconventional) company a chance. “— said Stillmank

While Stillmank makes it very clear every ones of their customers is just as important as the next. It is worth noting that even the team at Lambeau Field has taken notice to their flagship brand Wisco Disco, and has made it available in their stadium for the first time this season.

Stillmank has worked hard to be sure that his beer is not just available in North East Wisconsin, but literally born there in as many ways as possible. The company’s focus has been on keeping it local, nearly everything it takes to make the Stillmank brands comes in one way or another from Wisconsin. “As a local company, it is very important to us that our local economy thrives along with us. That is why when we look for a new product, service, or piece of equipment we look to Wisconsin first!” — said Stillmank

Stillmank’s flagship brand Wisco Disco is a cold conditioned amber ale brewed with a touch of lactose. This robust ale is wonderfully refreshing, and designed with the intent to be an easy drinking beer with Wisconsin cheese!

For information on where to find Wisco Disco or any of the Stillmank brews please visit: www.StillmankBrewing.com or follow them on Facebook at: https://www.facebook.com/StillmankBeerCompany

Stillmank Brewing is an independently owned Wisconsin family beer company, producing small-batch quality beer using traditional methods and ingredients. Brad Stillmank, award-winning brewer and Certified Cicerone┬«, born in Madison and raised in the Milwaukee area, spent a decade in Southwestern Colorado brewing beer and perfecting the art of small-batch brewing. Now living in the Green Bay area with his family, Stillmank is proud to introduce Wisco Disco to his neighbors and friends in Northeastern Wisconsin.