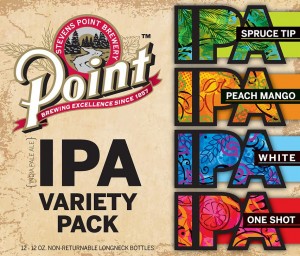 STEVENS POINT, Wis. — If you are an India Pale Ale fan, make it a point to try the Stevens Point Brewery’s four unique and adventurous new IPAs, available only in a new Point IPA variety 12-pack.

Containing three 12-ounce longneck bottles of each new IPA — only available in this 12-pack, the IPA variety pack is being introduced wherever Point’s handcrafted beers are sold, according to Joe Martino, Stevens Point Brewery Operating Partner.

“The IPA variety pack is a perfect IPA sampling opportunity, a showcase for the wide range of possibilities the IPA style offers,” Martino said. “We are excited about our new IPA variety pack and we think IPA fans will be, too, because it delivers more of what they are looking for.”

India Pale Ales, including Point’s Beyond the Pale IPA introduced last year, have experienced rapid growth in recent years and now represent the largest single style in the beer market’s robust craft beer segment. Craft beer sales volume surged 18% in 2013, according to the Brewers Association, and IPAs were in the forefront. Research firm IRI reports that IPA sales grew 44% last year in key off-premise retail channels, including an impressive 61.8% increase in the U.S. convenience store sales.

India Pale Ales evolved from the pale ales popular in England 200 years ago. They acquired their name because the first examples of the style were ales specially brewed for British troops and colonists in India who thirsted for the ales they enjoyed back home. A generous amount of hops and higher-than-usual alcohol content helped preserve these “India ales” during the long sail to South Asia in the days before refrigeration and pasteurization.

“We replace some of the hops we would normally use with blue spruce tips harvested when they are at their sweetest: young and tender,” Hopkins explained. “The Cascade hops provide a tasty bitterness in the flavor’s background. The end result is an extremely aromatic brew that will remind you of a walk in the Colorado mountains.”

The new Point Peach Mango IPA, brewed with Cascade and Cluster hops, is a deep orange color with a complex, fruity character.

“When you open the bottle, you will notice not only the citrusy aroma of the Cascade hops, but a pleasing peach aroma as well,” Hopkins said. “When you drink it, you will immediately taste the mango, which leaps onto your tongue before finishing with the hop bitterness typical of a traditional IPA.”

Sorachi Ace hops from Japan, a bittering hop perfect for brewing India Pale Ale, are front and center in Point White IPA, which invites consumers to “ichiroheian o inoru,” or “enjoy your journey.” Unlike traditional American or British-style IPAs, which are usually copper-colored, Point White IPA shines with a rich golden hue.

The variety pack’s final member is One Shot IPA, actually a series of limited-edition IPAs that will feature different hops and barley malts.

“The key to One Shot IPA is that it will vary with each batch we brew. We will use different malts and scarce hops, typically varieties where we can acquire only enough hops for a single brew,” Hopkins explained. “One Shot IPA is an exciting innovation for our customers because over time it will allow them to explore the entire realm of what an IPA can be, experiencing first-hand how different hops and malts combine to create really unique ales. Our first One Shot IPA brew features Calypso hops from the Pacific Northwest, which imparts a very tropical fruitiness to the beer.”