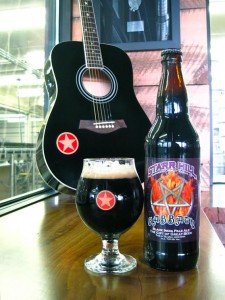 CHARLOTTESVILLE, VA— On the heels of its recent medals at the 2014 Virginia Craft Brewers’ Festival, Starr Hill Brewery, one of the most award-winning craft breweries on the East Coast, is introducing the fifth installment of its limited release All Access series, Sabbath Black India Pale Ale.

“Starr Hill has had a tremendous amount of success with our line of All Access beers this year. Our entire brewery team gets very excited about this limited release series,” said Mark Thompson, Starr Hill’s Founder and Master Brewer. “Sabbath is the perfect beer for fall, and our fans can look forward to enjoying it as the leaves change and the chilly nights set in.”

Sabbath Black India Pale Ale is brewed with heaps of American hops from the Pacific Northwest, including Amarillo, Citra, Simcoe, and Falconer’s Flight. The beer is generously dry-hopped to achieve an extremely fresh aroma, which highlights the powerful citrus characteristics of the hops. Flavor notes of lemon, orange and grapefruit balance the invigoratingly floral finish.

“The black IPA was created as a trick of the mind, with a grist bill that is very similar to an IPA, except with the addition of the dark chocolate malt, which provides roasted character at extremely low levels,” aid Robbie O’Cain, Starr Hill’s Manager of Brewery Operations. “Sabbath is a full-flavored beer with a strong citrus hop aroma, and it adds another facet to our expanding lineup of IPAs.”

Sabbath Black IPA will debut in the newly renovated Starr Hill Tap Room at a special release event on Saturday, August 30th. It will then be available on draft and in 22 oz. bottles for a limited time beginning September 1st throughout Starr Hill’s distribution footprint. It is replacing the King of Hop Imperial India Pale Ale, which won a Gold Medal for the Best IPA in Virginia at the Virginia Craft Brewers’ Festival.

Starr Hill Brewery was founded in 1999 by Mark Thompson and Kristin Dolan in Charlottesville, Virginia. Starr Hill is one of the most award-winning craft breweries on the East Coast, having won 21 Great American Beer Festival, World Beer Cup and Great British Beer Festival medals since its founding. The beer is distributed in nine states, including Virginia, Delaware, Georgia, Maryland, New Jersey, North Carolina, Pennsylvania, Tennessee, and Washington D.C.