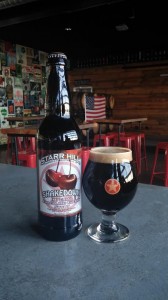 CHARLOTTESVILLE, VA— The holidays are rapidly approaching as Starr Hill Brewery introduces the sixth and final installment for 2014 of its limited release All Access series. This luscious Imperial Chocolate Cherry Stout is called “Shakedown,” and will surely be the perfect stocking stuffer for craft beer lovers.

“This year, our brewing team really outdid themselves creatively with our All Access series, and we’ve had tremendous success with a broad array of limited release beers,” said Mark Thompson, Starr Hill’s Founder and Master Brewer. “Shakedown is a gift in a glass, and it is the ideal accompaniment to dessert, or even by itself, sitting in front of a warm fire on a cold evening.”

Shakedown is a full-bodied imperial stout with cherries and dark chocolate blended into the beer during fermentation. Aromas of bittersweet chocolate and fruit delight the senses. Tartness from the cherries balances the smooth cocoa sweetness. Malty, chocolate and dark fruit flavors create a rich and complex beer that is meant to be savored slowly.

“Shakedown Chocolate Cherry Stout was a fun project. Experimenting with natural ingredients is an essential part of Starr Hill’s DNA. With Shakedown, the use of cherry puree and cocoa powder made the brewing process a real challenge,” said Robbie O’Cain, Starr Hill’s Manager of Brewery Operations. “We are proud of the results and believe we produced a well-balanced stout with a strong chocolate aroma and flavor, complemented by subtle cherry notes. It is very easy to overdo cherry, but we think we hit the mark on Shakedown.”

Shakedown Imperial Chocolate Cherry Stout will debut in the newly renovated Starr Hill Tap Room at a special Halloween release event on Friday, October 31st. It will then be available on draft and in 22 oz. bottles for a limited time throughout Starr Hill’s distribution footprint. It follows Sabbath Black India Pale Ale. Shakedown will also be a featured special in the Starr Hill Tap Room on International Stout Day, which is Thursday, November 6th, 2014.

Starr Hill Brewery was founded in 1999 by Mark Thompson and Kristin Dolan in Charlottesville, Virginia. Starr Hill is one of the most award-winning craft breweries on the East Coast, having won 21 Great American Beer Festival, World Beer Cup and Great British Beer Festival medals since its founding. The beer is distributed in nine states, including Virginia, Delaware, Georgia, Maryland, New Jersey, North Carolina, Pennsylvania, Tennessee, and Washington D.C.