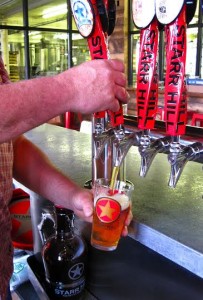 CHARLOTTESVILLE, VA— Starr Hill Brewery, one of the most award-winning craft breweries on the East Coast, is extremely excited for the opening of their newly renovated Tasting Room next weekend.

Starr Hill’s Grand Opening Weekend will kick off on Friday, April 18th, and the festivities will continue through Sunday, April 20th. The much-anticipated Grand Opening Weekend will feature several new limited release beers on draft, including Starr Hill’s summer seasonal, Soul Shine Belgian-Style Pale Ale. There will also be a special cask-style beer and multiple barrel-aged beers that are only available in the Tasting Room. Local food trucks Morsel Compass Mobile Kitchen and Big Easy Metro Market will be on site, and Richmond-based bluegrass trio Red Light Rodeo will perform the afternoon of Sunday, April 20th. Patrons can look forward to occasional performances by local musicians, as a portion of the Tasting Room has a dedicated stage for live music, equipped with a new, high-quality sound system.

“We’re hoping to recreate some of the magic from the original brewpub by bringing back the music, while offering innovative beers and showcasing one of Virginia’s largest production breweries,” said Mark Thompson, Starr Hill’s Founder and Master Brewer. “We want our fans to make this space their own, just as they did when Starr Hill was on West Main Street. We hope everyone will join us for our Grand Opening.”

The Tasting Room, located inside Starr Hill’s Crozet brewing facility, is just 12 miles west of downtown Charlottesville. The space doubled in size to 1,500 square feet from its original footprint in the middle of the production floor. It has a whole new look, featuring roll-up windows and doors with a view of the bottling and canning lines, custom concrete and wood bars, and an outdoor patio with an area for local food trucks to park. Most importantly, the Tasting Room includes a state-of-the-art draft system boasting 16 Starr Hill taps for tasting flights, pints, and growler fills.

Starr Hill Tasting Room’s new extended hours are Wednesdays and Thursdays from 1 — 8 PM, Fridays 12 — 8 PM, Saturdays 11 AM — 8 PM, and Sundays 11 AM — 5 PM. Tours of the full-scale production facility will continue on Saturdays and Sundays at 1, 2, 3 and 4 PM, and package beer and kegs will be available for purchase, along with Starr Hill merchandise. The new Tasting Room will also be available for private event rentals.

Starr Hill Brewery was founded in 1999 by Mark Thompson and Kristin Dolan in Charlottesville, Virginia. Starr Hill is one of the most award-winning craft breweries on the East Coast, having won 20 Great American Beer Festival, World Beer Cup and Great British Beer Festival medals since its founding. The beer is distributed in ten states, including Virginia, Delaware, Georgia, Maryland, New Jersey, North Carolina, Pennsylvania, South Carolina, Tennessee, and Washington D.C.