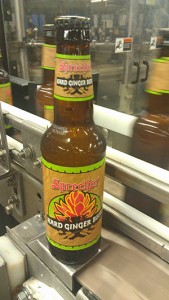 Glendale, WI — The long wait for Sprecher Brewing Company’s Hard Ginger Beer will soon be over! Bottled early this week, Sprecher’s newest beverage is a masterful brew of natural ginger and lime flavors in a low alcohol malt beverage. Cool lime, piquant ginger and a dry finish give Sprecher’s Hard Ginger Beer (4.7% abv) a crisp, refreshing drinkability that is perfect on its own or as a mixer in cocktails such as a Moscow Mule.

Like its cousin, Sprecher Hard Root Beer, this beverage is in a class by itself. “Sprecher Ginger Ale has long been considered tops in its category. We decided to see what would happen if we used it to create a low alcohol malt beverage. Based on early customer feedback we’re pretty confident our brewmaster created a winner,” said Sprecher president Jeff Hamilton. “Most Ginger Beers are non-alcoholic. Ours is 4.7% alcohol by volume, which, along with its taste profile makes Sprecher Hard Ginger Beer unique,” Hamilton noted.

Sprecher Brewery is located at 701 W. Glendale Ave, Glendale, WI. The Gift Shop is open seven days a week; tours are offered daily. More information about the brewery history, products, tours and Gift Shop hours can be found at www.sprecherbrewery.com, or by calling 414.964.2739.