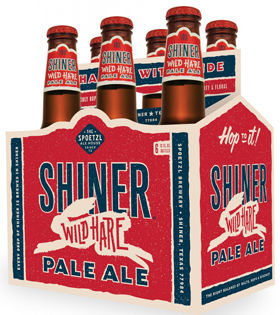 Shiner Wild Hare is a classic American Pale Ale made with American two-row barley with a blend of Munich and Caramel malts for rich malt flavor and clear amber color. US Golding and Bravo hop varieties are used in the kettle and fermenter for crisp bitterness and assertive fresh hop fruit and floral aroma. More than a pound of hops is used to produce each barrel of Shiner Wild Hare.

“As we start the brewery’s 103rd year our team is proud to brew this fine pale ale,” said Spoetzl’s brewmaster, Jimmy Mauric. “Shiner Wild Hare gives our brewers the opportunity to now share a great ale with our fans” he added.

Adding ales to the family of beers is just the latest chapter in the Spoetzl Brewery’s storied history. Shiner’s passion for more than a century has been crafting beers with character and personality.

Through their popularanniversary series, Shiner has given beer lovers access to a number of classic styles including M├ñrzen, Helles, Schwarzbier and Czech Pilsner.
Their seasonal offerings have allowed them to innovate too. They have brewed with Texas peaches and roasted pecans to create Holiday Cheer, infused their refreshing summer favorite Ruby Redbird with grapefruit and ginger and crafted the perfect cookout beer with mesquite-smoked Shiner Smokehaus.

Those round out the year-round lineup of the legendary Shiner Bock, Shiner Blonde, Shiner LightBlonde, Bohemian Black Lager and Shiner Hefeweizen to create a diverse and distinctive family of craft beers. Shiner Wild Hare Pale Ale is a fine addition to this family.

More About Shiner Beer and the Spoetzl Brewery:

Founded in Shiner, Texas (population 2,070), the Spoetzl Brewery is one of America’s oldest independent breweries and the country’s fourth largest craft brewer. Shiner’s award-winning beer is available in 41 states. Every drop of Shiner is still handcrafted and bottled right at the spot where it all started in 1909. Visit us at www.shiner.com