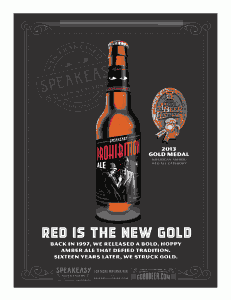 “Prohibition is our founding recipe,” says Brewmaster Kushal Hall. “ We’ve been brewing this beer for 16 years, and we’re honored one of our flagship beers is recognized amongst such esteemed competition.”

“I have to give kudos to Kushal for expecting no less than excellence from his team,” says Brandon Borgel, Director of Sales & Marketing. “Since he’s taken over, our beers have become world class and I hope this will be the first of many awards to come.”

With a new gold medal, plus the Most Creative Booth Award for their 1920s inspired hideout bar, Speakeasy’s GABF 2013 wins are an exciting addition to the brewery’s growing footprint. Speakeasy is in the midst of a significant expansion across the US that will increase production capacity to almost 50,000 barrels in 2014.

Presented by the Brewer’s Association, GABF is the largest national beer competition, recognizing the most outstanding beers produced in the United States. This year, a record number of 4,809 entries were received from 745 US breweries. Through a series of blind taste tests, Prohibition Ale was selected against 88 other amber ales that were judged.

Defiantly producing fresh batches of beer in a secret warehouse in San Francisco’s long forgotten Butchertown District, Speakeasy has been crafting beer in San Francisco since 1997.