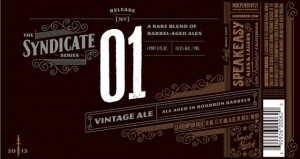 Each Syndicate release will be a unique blend of strong beers that have been aged in American spirits barrels for no less than nine months. Brewmaster Kushal Hall and his team developed the blend for Syndicate No. 01 through a series of scale tests, akin to how winemakers combine multiple vintages and varietals to create a single distinct blend.

“This is certainly the most unique beer we’ve ever produced,” said Kushal Hall of the project. “There were so many factors to consider in the creation of this beer—the collective recipe writing, the brewing & fermentation of each of the component beers, the aging of each beer in the different types of bourbon barrels, and how the individual beers interacted with each barrel. We had to see how the wood reacted with the beer and how the malts broke down and created new flavors.”

Syndicate No. 01 is a blend of six strong ales matured between 12-26 months in various bourbon barrels. The base of the blend was Old Godfather Barleywine (51%) which was aged for over two years. Two different Imperial Stouts, Black Hand Volume I (15%) and Two Minutes to Midnight (14%) introduced rich dark chocolate notes and a creamy mouthfeel. Betrayal Imperial Red (11%) added notes of dark fruit and toffee malt, while Double Daddy Imperial IPA (5%) imparted a fruit-forward hop spice. A final addition of Payback Porter (3%) provided subtle notes of bitter cocoa. The final brew is rich with aromas of bourbon, vanilla bean and dark fruit, with complex flavors of burnt caramel, spice, and toasted oak.

“The Syndicate Series represents a culmination of a true labor of love,” said Brandon Borgel, Director of Sales & Marketing. “Our barrel-aging program has been in the works for over two years. What started as a small idea has turned into something we’re excited to finally unveil. We are looking forward to expanding the program with many more releases in the future.”

Syndicate No. 01 will make its debut at the Speakeasy Tap Room at 1195 Evans Ave in San Francisco on Dec 5th at 3pm, to commemorate the repeal of Prohibition. With production limited to 350 cases, 22oz wax-dipped bottles will be available only at the brewery and in a handful of retailers across the west coast.

In 1997, Forest Gray and his cadre of bootleggers were inspired to bring their exceptional brews from the underground to the masses, defiantly producing small batches of beer in a secret warehouse in San Francisco’s long forgotten Butchertown District. Starting with a single, iconic beer that immortalized the spirit of those who persevered when America’s taps ran dry—a bold, hoppy amber ale known as Prohibition Ale—Speakeasy now brews a wide array of acclaimed beers from sessionable pale ales to bourbon barrel-aged imperial stouts. With a presence permeating the West Coast and major metropolitan markets, Speakeasy has grown by leaps and bounds, yet still produce many of their beers on the original hand-cranked, steam-fired brewhouse that started it all.