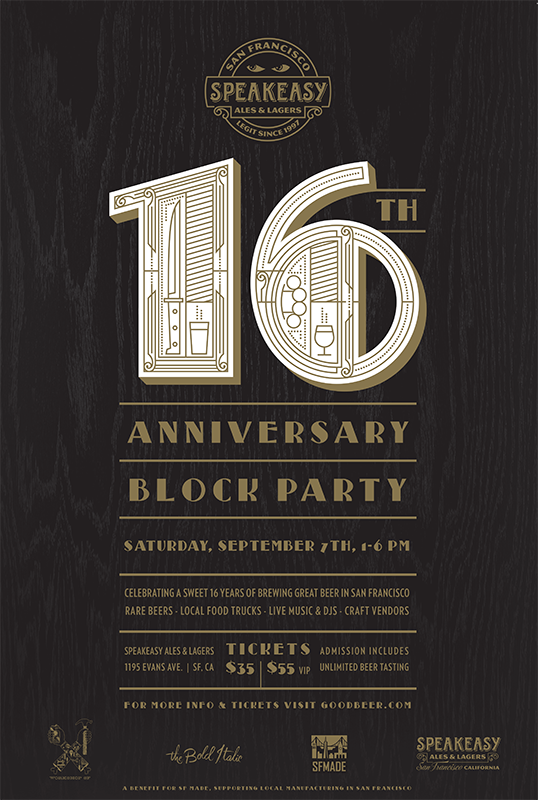 Perhaps most exciting for beer lovers: the party will feature unlimited tastings of rare and never-before-tried Speakeasy beers, along with the first taste of this year’s anniversary release, Blind Tiger. “We’ve been dying to release a beer like Blind Tiger,” says Brewmaster Kushal Hall. “It’s a massively hopped Imperial IPA that embodies all that an Imperial IPA could want to be.”

The event will feature celebrated local food and drink from Southpaw BBQ, Rosamunde Sausage Grill, McVicker Pickles, Ritual Coffee, Hey Cookie! and Beaver Mobile Café, with more vendors to be announced. Get down at the Brewhouse Live stage, with musical entertainment from Burn River Burn, Custom Built Empire and Vagabondage.

All attendees will also receive a collectible glass to take home. A special “Godfather’s Club” VIP ticket provides exclusive access to the Speakeasy Tap Room, a collectible poster and ultra rare beers not available anywhere else. Speakeasy Ales and Lagers is easily accessible by bike, bus or train, with plenty of bike parking.

Speakeasy Ales & Lagers has been crafting unique and exceptional beers in San Francisco since 1997. Using its original steam-fired brewhouse, Speakeasy operates out of a warehouse in San Francisco’s long forgotten Butchertown District.