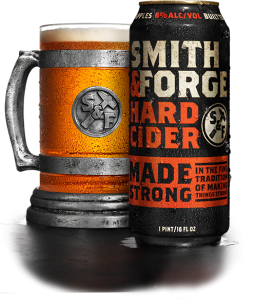 CHICAGO, IL — Launching nationally this month, Smith & Forge is a hard cider fermented in the tradition of days gone by. With a rich amber color, 6% alcohol by volume (ABV), a distinct, not-too-sweet taste and a fantastically crisp finish, Smith & Forge is built to refresh.

“There was a time when more hard cider was consumed in America than beer. Now hard cider is exploding again, but the sweetness of many current ciders can be a turn off to beer drinkers, and some of them are looking instead to spirits and crafts for variety,” said David Kroll, MillerCoors vice president of insights and innovation. “Smith & Forge is a strong, just-sweet-enough hard cider that encourages guys to discover — or rediscover — the world of hard cider.”

The Smith & Forge packaging features a black, bold orange, and antique white design and a distinctive blacksmith’s hammer icon that delivers a timeless message of a past era – an homage to simpler times when toughness and hard work were celebrated values.

“Once upon a time, barrel-chested men proudly drank tankards of hard cider,” continued Kroll. “Smith & Forge is honoring those times by bringing back the sturdy side of hard cider.”

MillerCoors will support Smith & Forge with a national marketing campaign kicking off in March and includes multi-channel activations with media partners such as ESPN, Discovery Channel, Comedy Central, Thrillist and SB Nation.