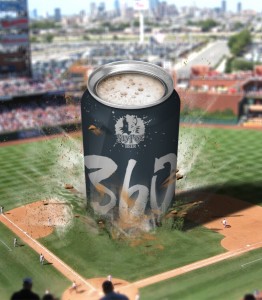 Last year Sly Fox introduced the 360 lid on their popular Helles Golden Lager 12oz can. This feature allows the entire lid to be removed so that the can effectively drinks link a glass wherever you are. The wide open top offers wide open flavor and aroma in a unique beer drinking experience.

Now the Pottstown brewery is breaking new ground by releasing a new 6.2% abv India Pale Ale in a 16oz version with the wide open lid. The stark can in matte finish gray is a triple play of flavor, size and technology that craft beer lovers are going to appreciate. The new IPA was tested at Washington DC’s Craft Brewer’s Conference last year and those who tried it clamored for an official release. Now they’ll have it in Sly Fox’s second beer featuring a 360 lid and their first 16oz can.

Finally big, bold flavor in a big, bold can that drinks like a favorite pint glassÔÇªanytime, anywhere. Sly Fox Brewing Company celebrates India Pale Ale tallboy-style, with an exciting fusion of Bravo, Cascade, Centennial and Lemondrop hops that’ll enliven the senses! Wide open flavor and aroma sing out in this dry-hopped IPA creatively packaged in the innovative “360” can.

Visit Citizens Bank Park’s craft beer stands to find cans of 360 IPA as well as Pikeland Pils and Royal Weisse on draft. Sly Fox 360 IPA will be available at area retailers in the coming weeks.