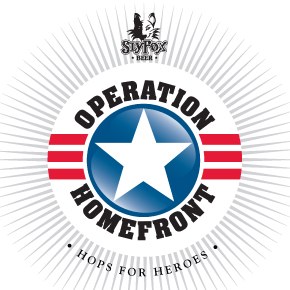 Pottstown, PA — For the second straight year, Sly Fox Brewing Company is participating in Hops for Heroes, joining eight other breweries across the nation to brew Homefront IPA, a special beer which is brewed from the same recipe at all locations.

Its unique characteristics are the addition of orange peel to the boil and a brief soaking in tank with maple Louisville Slugger bats. The proceeds from this combination of a classic American tradition, beer and baseball, will be donated to Operation Homefront, a national group that provides emergency financial assistance to military families.

Homefront IPA is draught only and was released at both Sly Fox locations just in time for Memorial Day. Origlio Beverage and Galli Beer Distributors are distributing the beer to taverns and pubs in the company’s Southeastern Pennsylvania and Pittsburgh markets respectively (last year, when distribution was in the local area only, twenty-nine taverns and pubs in and around Philadelphia signed up to sell Sly Fox’s version of this special brew). The ingredients for the brew were donated by the brewery’s suppliers and proceeds from everyone involved, including the distributors and retailers, will go to the Pennsylvania and Delaware chapters of Operation Homefront.

“I think it is characteristic of the craft beer industry that we all work hard to be part of our communities and support worthwhile endeavors,” says Sly Fox managing partner John Giannopoulos. “We certainly do what we can with as many local charities as possible, but a chance to be part of a national campaign which benefits our fighting men and women and their families is something very special.”

Homefront IPA was created at Fremont Brewing Co. in Seattle in 2011 as a collaborative brew with Center of the Universe Brewing Co. In addition to both those breweries and Sly Fox, other participants this year include Cigar City Brewing in Florida, Perennial Artisan Ales in Missouri, 21st Amendment Brewery and Stone Brewing Co. in California, the Phoenix Ale Brewery in Arizona and Left Hand Brewing Co. in Colorado.