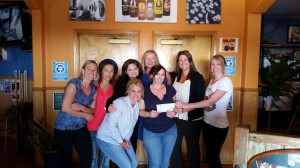 “We created Ales for Autism after the President of FAAN, Fatima Naylor, reached out to me. She is so full of passion and also public about her family’s journey with autism. It was an easy decision to get behind this local cause. I think this will be a yearly event during April to coincide with Autism Awareness Month,” said Meredith Maier, co-owner of Six Rivers Brewery.

To raise the money the brewery donated one dollar per pint sold of their Hammond Trail Cream Ale for 30 days, sold custom Ales for Autism pint glasses, t-shirts and hosted an event and raffle.

“We are so blessed to have people like Meredith and Talia in our community. They believe in FAAN’s mission in bringing autism awareness to the North Coast. Many local families will have benefitted from this amazing event,” said Fatima Naylor, president of FAAN.

FAAN is a non-profit corporation dedicated to providing support to assist the local education system to adapt to the growing and changing needs of children with autism. For more information about FAAN call 707-498-1724 or email faaninfo@gmail.com.