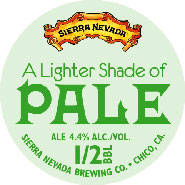 Bill Manly of Sierra Nevada could not pinpoint the exact release date of the beer, but did note that it is slated to make its first appearance to consumers during Philly Beer Week (June 3rd-12th).

Manly also provided a short description of the beer.

This session ale is a delicate golden color, but packs a solid hoppy wallop. It has a creamy mouthfeel from the use of oats and a nice spiciness from an addition of rye in combination with our standard two-row barley. The hops are apparent but refined in their flavor from the use of Strisselspalt and Crystal varieties.

Ten individuals participated in camp that created the session beer. Terrance Leach of Time Restaurant and Bar, Andy Jarin of B&B Beverages, P.J. Mcmenamin of McMenamin’s Tavern, Casey Wayne Parker of Jose Pistola’s, DJ Fernandes of Grace Tavern and Sean McGettigan of Station Taproom, all of Pennsylvania, made the trip to the west coast to collaborate on the brew.

Bill Manley could not immediately confirm which accounts will be carrying A Lighter Shade of Pale.