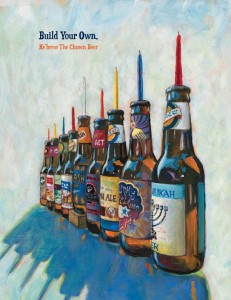 Clifton Park, NY — Break out the latkes, gelt, Chanukah candles, and He’brew Beer┬«, it’s time to start prepping for the holidays! This November, Shmaltz Brewing Company rolls out three limited-edition releases straight from their newly expanded brewery in Clifton Park, NY. First up is the debut of Shmaltz’s long awaited homage to the 8 crazy nights: Hanukkah, Chanukah: Pass The Beer┬«, a Dark Ale brewed with 8 malts, 8 hops, and 8% ABV. Next in line is the Anniversary beer, Jewbelation 18┬« (18 malts, 18 hops, and a highly sessionable 12.4% ABV), which marks the birth of an entirely new take on the Award-Winning Jewbelation┬« series. Last, but certainly not least, the 5th Annual He’brew Gift Pack┬« hitting stores this Thanksgiving. Candles Won’t Be The Only Thing Getting Lit this holiday season!

After only 18 years in business, America’s largest, most award-winning and still only Jewish themed Craft Brewery, Shmaltz Brewing Company is proud to debut Hanukkah, Chanukah: Pass The Beer┬«. Destined to become the official chosen beer of the holiday season, Hanukkah, Chanukah: Pass The Beer┬« is a luscious Dark Ale brewed with 8 malts, 8 hops, and heats up at 8% ABV. 8 is a miraculous number in Jewish life. Its cultural/religious significance runs the gamut with several holidays spanning 8 days (Chanukah, Passover, Sukkot), a bris (circumcision) taking place on the newborn’s 8th day, and Seinfeld running for 8 years (for more deep shtick, see the 4-pack label). As latkes are frying and the battle royale of dreidels are spinning, Shmaltz lends some much needed light to the impending winter darkness with Hanukkah, Chanukah: Pass The Beer┬« launching nationally in 12 oz bottles in 4-packs starting on November 1, 2014, as well as in the He’brew Gift Pack┬« 2014.

When asked about this year’s Jewbelation┬«, Shmaltz founder Jeremy Cowan says, “So many friends have inquired about when will we stop upping the ante with the level of malts, hops, ABV, and my response has been ‘Never… well, um, I mean now!’ Witness our newborn Black Session Barleywine. 18 malts, 18 hops, and now available in a sessionable 12.4% ABV so we can ship to allll our states again. Jewbelation is now in session. L’Chaim!”

Jewbelation 18┬« will hit the national market just before Thanksgiving in 22 oz bottles, on draft at select bars, and included in the soon to be released 5th Annual He’brew Gift Pack┬«.

The Gift Pack┬« features a custom glass, Chanukah candles and a beautifully hand-painted “Build Your Own” Beer Menorah portrait by local Ballston Spa, NY painter Jennifer Maher (www.yourtoyportrait.com; please see the attached portrait below). Transform each of the 8 iconic bottles, plus one Shamash bottle (0 malts, 0 hops, 0% ABV), into your very own beer menorah. Snap a photo and enter your masterpiece in the 5th Annual “Build Your Own Beer Menorah” Facebook competition for a chance to win a chosen prize!

Detailed information regarding Shmaltz’s set of national events taking place at 18 Chosen Bars will be announced in the coming weeks.