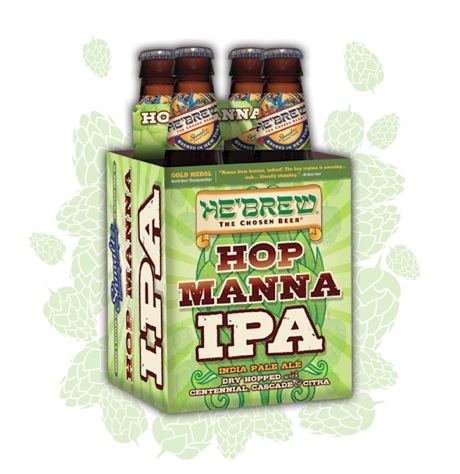 Clifton Park, NY — On September 1, 2014, Shmaltz Brewing Company will release Hop Manna IPA┬« nationwide in new 12oz 4-packs and will be available throughout our distribution footprint with a suggested retail price of $9.99 per 4-pack.

Until now, the World Beer Championship Gold Medal Winner was only available on draft and in 22oz bottles. The 12oz packaging will now be available year-round due to overwhelming demand by hopheads to include Hop Manna IPA┬« in their regular rotation of favorite IPAs. India Pale Ale’s now make up approximately 20% of craft beer production, and there’s little indication that this style is slowing down anytime soon. The IPA craze coincides with a great sense of exploration with beer aficionados tasting as many different hop forward brews as they can find while discovering the best-of-the-best. You’ve tried the rest…now you have four new reasons to pick up a brand new Hop Manna┬« 4-pack and ascend into hop heaven with this 6.8% ABV, 65 IBUs dry hopped sensation.

A delicious IPA bearing floral and citrus flavors, Hop Manna IPA┬« features six robust hops (Warrior, Cascade, Citra, Amarillo, Crystal, Centennial), it’s dry hopped with Centennial, Cascade and Citra hops and is balanced out with five delicious malts (Specialty 2-Row, Wheat, Munich, Vienna, CaraMunich 40). Not a San Diego IPA (enticing as they are) and not trying to re-create the excellent standouts from friends such as Dogfish, Founders, Lagunitas, Three Floyds and so many others, Hop Manna IPA┬« aims to create a unique story of its own.

Critics have offered overwhelming praise for Hop Manna IPA’s┬« singular profile. All About Beer’s “Beer Talk” judge Roger Protz notes, “Manna from heaven, indeed! The hop regime is amazing. It has a lush pale bronze color and a hop aroma that is literally stunning.” DRAFT Magazine adds, “…its malt presence is sublime.” Esquire.com included Hop Manna┬« as one of “The Best Beers of 2012.”

Shmaltz is no stranger to hopped-up specialty beers. In celebration of their 10th Anniversary (2006), HE’BREW Beer┬« introduced its award-winning rye-based double IPA, Bittersweet Lenny’s R.I.P.A.┬«. The standout robust brew has become a year-round staple in the HE’BREW Beer┬« line-up; it’s garnered a “99 Rating” by the Beer Advocate Bros, a “98 Rating” on Ratebeer.com, and it took home a Gold Medal at the World Beer Championships. Mazel Hops! Double IPA┬«, brewed for the first time in 2014 for the Beer of the Month Club’s 20th anniversary, will make another much anticipated appearance in 2015. Beer of the Month Club tasting notes say, “We found the aroma intoxicating, as luscious, fruity hops practically jump out of the glass…On the palate — it’s a hop explosion.”

HE’BREW Beer’s┬« first-ever single IPA, Hop Manna┬« is crafted to provide session after session of hop nourishment from the Shmaltz Tribe to yours — a true gift from the Craft Beer Promised Land.

About Shmaltz Brewing Company
Ranked in 2013 as one of the “Top 100 Brewers in the World” by RateBeer.com, Shmaltz won 9 Gold and 5 Silver Medals in the World Beer Championships in 2012. A recipient of the “Distinguished Business Award” by the Brooklyn Chamber of Commerce, Shmaltz was also included in the “Top 50 Fastest Growing Bay Area Companies” by San Francisco Business Times.

Founder and owner Jeremy Cowan established the company in San Francisco in 1996 with the first 100 cases of He’brew Beer┬« hand bottled and delivered throughout the Bay Area in his Grandmother┬Æs Volvo. He’brew┬« now sells across 37 states, through 40 wholesalers and nearly 5,000 retailers. In 2007, Shmaltz released a new line of craft brewed lagers under the Coney Island┬« banner. The Coney Island brand was recently acquired by Alchemy and Science, a craft beer incubator, owned by Boston Beer (Sam Adams).

In 2010/11, Cowan published his small business memoir, Craft Beer Bar Mitzvah: How It Took 13 Years, Extreme Jewish Brewing, and Circus Sideshow Freaks to Make Shmaltz Brewing Company an International Success. A free sampling of Chapter One and suggested beer pairings, can be viewed atwww.craftbeerbarmitzvah.com. In 2012, Cowan spearheaded the creation of the non-profit New York City Brewers Guild (which manages NYC Beer Week) and served as its Founding President.

From the label of Hop Manna┬«

In the book of Exodus, the ancient Hebrews survived 400 years of bondage before the ultimate supreme court dropped the 10 deadly Plagues on the land of the taskmasters and the head dictator, Pharaoh. Even then, only begrudgingly, did he Let My People Go. The freedom ride across, nay through the sea left a band of wandering nomads broke and suffering, no doubt with a profound hunger — and a mighty thirst. Enter the Manna: a glorious gift to nourish body and soul. Manna was said to combine the tastes of everything most delicious to each individual, depending on their desire. And as the Good Book says, Each shall gather according to one’s need and shall enjoy a double portion for thine chosen day of rest. Manna fed the entire tribe, but tradition suggests the righteous received manna ground in a heavenly mill, while the wicked had to grind it below for themselves. Hear o’ Tribe of Shmaltz — Behold: A celebration of the flower of the craft beer revolution! A golden opportunity to feed your inner hop head and rejoice in HOP MANNA, our newest delicacy of the modern He’brew Beer family. L’Chaim!