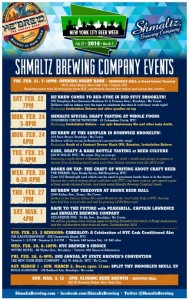 New York – As the President of the New York City Brewers Guild, Shmaltz Brewing Founder and CEO, Jeremy Cowan has worked with his fellow NYC Brewers to put together the biggest, baddest, most mind-blowing craft beer bash they could think of! Behold, the 6th Annual New York City Beer Week 2014, happening in venues all across NYC this Friday, February 21 – Sunday, March 2, 2014. Please see the list of signature and special events featuring He’brew – The Chosen Beer┬«. Don’t miss out on covering the extra special Opening Night Bash at Vanderbilt Hall (Grand Central Terminal; Feb. 21) and Jeremy Cowan moderating “Books on Tap: The Craft of Writing About Craft Beer” (The Strand; Feb. 26).

*A spectacular setting for New York City’s premier craft beer spectacle of the year, the New York City Brewers Guild hosts its Opening Night Bash at the iconic Vanderbilt Hall featuring rare and obscure beers from more than 30 breweries from NYC and friends around the region and across the country. Shmaltz pours Jewbelation REBORN┬«, R.I.P.A. on Rye┬« and some extra special beer from their secret stash! Will the 2014 version of Funky Jewbelation┬« make an appearance? Find out at the NYC Brewers Guild’s biggest party of the year! Ticket price includes an official NYC Beer Week 2014 tasting glass, and unlimited beer tastings.

*He’Brew┬« takes over the taps at Bed-Vyne, Bedford Stuyvesant’s newest craft beer and wine mecca. Come out and taste Jewbelation REBORN┬« and other goodies on tap. Celebrate the start of craft beer week right!

*Join Shmaltz for a special tasting of several beers on tap including Jewbelation REBORN┬« — Shmaltz’s epic anniversary ale and other tasty drafts.

*The Sampler is Bushwick’s newest bottle shop, boasting an impressive number of taps in a cozy little nook off the beaten path. Come out for Death of a Contract Brewer┬«, Reunion┬«, and Jewbelation REBORN┬« on tap!

*Beer Culture hosts a triple-threat of Shmaltz beers: cask + draft + bottle with plenty of options to choose from including barrel aged and other limited edition releases from the 2013 vault.

Wednesday, Feb. 26, 6:30pm – 8pm
Books on Tap: The Craft of Writing About Craft Beer
The Strand, Rare Books Room
828 Broadway, NYC
Entrance cost is a $15 Strand gift card, which can be used to purchase books then or in the future!

*NYC Brewer’s Choice returns to NYC Beer Week 2014. This year’s NYC Brewer’s Choice has an all New York State focus. With so many amazing existing and new breweries in the region, Brewer’s Choice is thrilled to focus on these brewers and their specialty beers. Keynote speaker is Jeff O’Neil (Peekskill Brewery, Peekskill, NY), and 25+ brewers personally pour their favorite beers. The event is co-sponsored by Beer Sessions Radio on the Heritage Radio Network.

*Settled in the historic Arthur Ave retail Market in the “real” Little Italy of NYC, this tiny beer hall has a local vibe and is set to pour all He’Brew┬« taps! Right smack dab amongst hand rolled cigar vendors, traditional butcher and cheese merchants, Bronx Beer Hall is a shining star in this forgotten borough!

*It is true that you don’t know where you are going until you know where you have been. Join Shmaltz, Peekskill, and Captain Lawrence as they celebrate some of New York’s finest craft beers with a trip down memory lane (Delorean not included.) The special event features some vintage gems including Shmaltz’s first batch of Funky Jewbelation┬«, and the collaborative effort from all three breweries, Geektoberfest 2010┬«.

*The 15th annual strong ale festival promises to be extra special. Shmaltz pours their strongest ale, and what could be the most skull splitting beer at the festival, Jewbelation REBORN┬«.