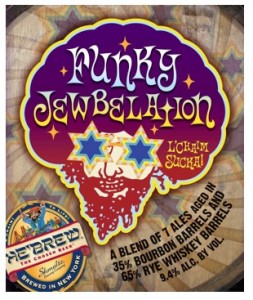 “Funky Jewbelation 2014 embodies Shmaltz’s commitment to the craftsmanship of truly exceptional beers,” says Shmaltz Brewmaster Paul McErlean. “Funky has been aged in Buffalo Trace Bourbon and Sazarac and Willett Rye whiskey barrels. It’s a monumental blend of our favorite ales that we’ve lovingly nurtured for the past couple years. Since some of the beers were contract brewed and some brewed at our new brewery in Clifton Park, this Funky offering bridges our old life with our new. Funky Jewbelation 2014 glistens a deep ruby color with a big, tart, sour cherry flavor and a malty earth aroma. A lovely puckering is complemented by subtle hints of bourbon, charred wood, molasses and light notes of vanilla.”

The Limited Engagement Barrel-Aged Series not only represents some of Shmaltz’s most decorated beers, but also boasts the highest consumer ratings from BeerAdvocate.com and RateBeer.com. The latter ranked Shmaltz Brewing as one of the “Top 100 Breweries in the World” in 2013. With the release of this year’s Funky Jewbelation┬«, Shmaltz continues to design sophisticated beers that rank with the world’s best specialty libations

“You best be ready to shake some tail feathers when you bring this extra-special beer to the party.” –The Kitchn

“Cheers to He’Brew for managing to, impossibly, blend six beers into a whole greater than its parts.” –Yum Sugar

“…in this brewmaster’s skilled hands, the result is a beer with great depth and nuanced flavor.” –Brewsandbooks.com

“The beer is indeed funky, in all the right ways.” -Cooking District

Founder and still sole proprietor Jeremy Cowan established the company in San Francisco in 1996 with the first 100 cases of He’brew Beer┬«. He’brew┬« now sells across 37 states, through 40 wholesalers and nearly 5,000 retailers. In 2007, Shmaltz released a new line of craft brewed lagers under the Coney Island┬« banner. The Coney Island brand was recently acquired by Alchemy and Science, a craft beer incubator, owned by Boston Beer (Sam Adams).