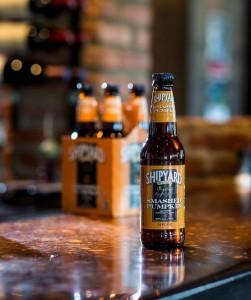 Shipyard Smashed Pumpkin is a big-bodied beer with a light coppery orange color and pleasing aromas of pumpkin and nutmeg. The Pale Ale, Wheat and Light Munch malts combine with the natural tannin in pumpkin and the delicate spiciness of hops to balance the sweetness of fruit.

Smashed Pumpkin pairs well with sharp cheeses, nuts, lamb, hearty stews and desserts like flan, pumpkin pie and Fig Newtons. Chefs find this an excellent beer to cook with in dishes such as braised short ribs.

This beer won Grand Champion and Best of the Northeast in the 2012 United States Beer Tasting Championships and took home bronze medals from the Australian International Beer Awards in 2011 and 2012.

More about the beer can be found at this link: http://shipyard.com/content/smashed-pumpkin.

Shipyard Brewing Company is located on the historic waterfront in Portland, Maine and produces 19 varieties of award-winning English style and seasonal beers. Established in 1994, Shipyard has grown to become the 14th largest craft brewery and 21th largest brewery in the U.S. A full list of distributors can be found at this link: http://shipyard.com/pdf/DISTRIBUTORS.pdf