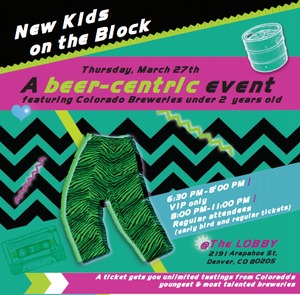 DENVER — Denver Off The Wagon, Imbibe, The LOBBY and PorchDrinking.com have announced the second annual New Kids on the Block Beer Festival. This beer-centric and ‘80s themed event will take place on Thursday, March 27 at 8 p.m. at The Lobby (2191 Arapahoe Street) in Denver.

“Beer is everything in Colorado,” said Casey Berry, founder of Imbibe. “As a state we continue to produce award winning beer, year-after-year. At Festivus we highlight local Denver breweries, Collaboration Festival shows the art and creativity of Colorado breweries and New Kids on the Block features those newer breweries making waves.”
As part of Colorado Craft Beer Week, New Kids on the Block includes unlimited beer tastings, ‘80s jams, a beer-themed buffet and costume contest.
Participating breweries include:
“We always try to support small local breweries, which is why we love hosting this event,” said Meg Batizy, co-owner of The Lobby. “Colorado has become such an epicenter for beer culture, and it’s exciting to get some of the best new up and comers together for a showcase once a year.”
General admission tickets for New Kids on the Block are on sale now for $25 at http://imbibedenver.com/nkotb. A portion of proceeds will benefit the Colorado Brewer’s Guild.
About Imbibe
Imbibe is a Denver-based event production company and website that coordinates with the best restaurants, bars, music venues and other fine establishments to create craft events! The company produces events such as the Denver Beer Festivus and Collaboration Festival. Learn more atwww.imbibedenver.com.
About the Colorado Brewers Guild
The Colorado Brewers Guild (CBG) was founded in 1995 by Colorado craft brewers in an effort to promote the quality and diversity of the growing Colorado craft brewing industry. The CBG provides valuable information to the beer-drinking public and the media while also serving to protect the industry and promote positive public policy for Colorado craft brewers.The Colorado Brewers Guild includes the majority of the craft breweries and brewpubs and represents more than 95 percent of craft beer production in the state. CBG is a 501 (c)(6) non-profit trade association and retains advocates to work with the state legislature on behalf of Colorado’s craft brewers. For more information, visit www.coloradobeer.org.