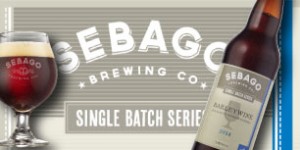 “This is always one of our most highly anticipated beers, both in the brewery and at our brewpubs. We’ve put a lot of love into this beer over the last fourteen months and are pretty proud of the result,” says Tom Abercrombie, Sebago Brewing Company Brewmaster.

Barleywine is Sebago’s highest rated beer, according to bothratebeer.com and beeradvocate.com, scoring a 97 and 94 respectively, so anticipation of the 5th batch has been very high.

“This beer is beyond impressive. Zero hype, reasonable price, and a shelf beer. I honestly think it can go head to head against the titans of barrel aged barley-wines.” – via beeradvocate.com.

“Overall, an awesome barrel aged barleywine and by far the best beer I’ve ever had from Sebago. Possibly the best version of an American style barleywine I’ve had that was barrel aged.” -via beeradvocate.com.

Sebago’s Barleywine is available on draft throughout New England and in limited release 22oz bottles.