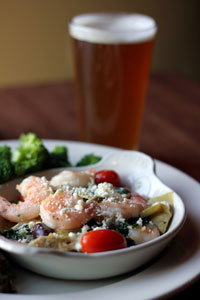 GORHAM, ME – Sebago Brewing Company is pleased to announce the launch of four new specialty menus at their brewpubs in Southern Maine.

Earlier this year, owners Brad Monarch, Tim Haines and Kai Adams realized that with four brewpub locations in Southern Maine, there was a great opportunity to diversify the menu offerings at each location. Monarch says, “We have a lot of guests who visit all four of our pubs. Even though we do daily specials at every pub, we wanted to offer something different that is unique to each location. Over a quarter of the menu now varies from location to location. We never wanted to be a cookie cutter chain where all the pubs were exactly the same”.

They examined the types of foods that were currently available at area restaurants and identified what the needs were in each town. For instance, there are not many fresh seafood options in Scarborough, so that pub now features fresh seafood selections. There are many places to get fresh seafood in Portland, but few dining options focus on steak, so that menu was expanded offering quality steaks within an affordable price range. The Kennebunk location, formerly a Ricetta’s, is using the beautiful existing wood burning brick oven to turn out a number of flatbread pizzas.

The talents of the kitchen staff in each location have also been highlighted.”In Gorham, our kitchen manager is known for his outstanding house smoked meats and fish using barbecue sauces made from scratch, so we decided it would be a natural niche for them. Our kitchen staff had much more input in this menu change. We really aim to empower our staff and focus on their strengths” says Monarch.

Haines advocated for an increased use of locally grown and produced foods, adding, “We have always supported our local communities and saw this as an opportunity to expand that goal by using Portland Pie Company pizza dough, Pineland Farms meats and cheeses, Maine-grown tomatoes, and local, fresh seafood to name a few.”

Adams, often referred to as the chief “beer guy” in the company, is pleased with the beer focused offerings, saying “We are wood roasting our own corned beef for a Runabout Red Ale braised Rueben, and using beer dough for the flatbread pizzas. We are also offering more daily specials made with our beer such as a recent “Roasted Turkey with Slick Nick Winter Ale Gravy” at our Portland pub. It really complements the brewing side of our company and is an excellent way to utilize our own products!”

The new menu is now available at Sebago Brewing Company’s four Southern Maine brewpubs in Portland, Scarborough, Gorham, and Kennebunk. The full menus can be viewed at their website by clicking here.