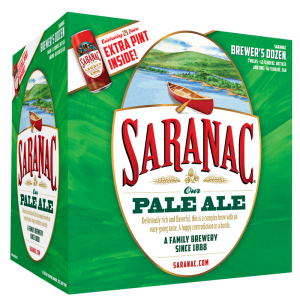 Judges from England, Canada and the United States evaluated more than 2,500 beers from breweries around the world.

“These two gold medals for our core beers just reinforce why we’re so excited about our 125th anniversary celebration packs,” said president Fred Matt. “We’ve always focused on making quality beers that our consumers will choose over anything else — which is exactly what the judges did.”

Saranac is launching 125th celebration packages entirely focused on their core beers: there will be an extra pint of their new Legacy IPA in select packages, including Pale Ale, White IPA, and Trail Mix 12 packs. The Trail Mix pack includes these two gold medal winners, as well as Saranac’s “Black Forest” dark lager, which is the brewer’s most awarded beer, and the White IPA.

Pale Ale won gold for the English Pale Ale category. Pale Ale is Saranac’s flagship brew that is rich and fruity with a crisp finish. The brewery recently updated the brewing process for this classic favorite, using their new “Hop Infusion Process” which maximized beer to hop exposure for a fresher taste. Pair it with burgers, bread pudding and cheddar cheese.

F.X. Matt Brewing Company in Utica, N.Y., was founded in 1888. Today, under the leadership of the third and fourth generations of the Matt family, the brewery is celebrating 125 years of brewing. Through a commitment to innovation and brewing excellence, the company has earned a reputation as one of the country’s most respected brewers of craft beers, including the Saranac line. In each bottle of Saranac, you’ll find exceptional quality, distinctive ingredients and a refreshing twist on tradition — the signature of the F.X. Matt Brewing Company.