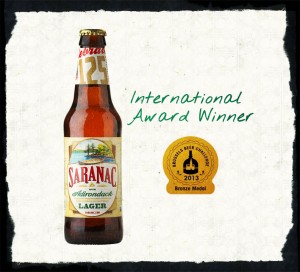 Utica, NY– Saranac Adirondack Lager has done it againÔÇªfor the 8th time. It has been awarded as one of the best beers in the world at the Brussels Beer Challenge, winning a bronze medal in the German Style Marzen Category. Adirondack Lager is Saranac’s third most awarded beer, behind Black Forest and Pale Ale, which recently won gold at the U.S. Open Beer Championship-the first competition Pale Ale entered after implementing the new “Hop Infusion Process.”

Adirondack Lager was the original Saranac Beer introduced back in 1985. It was initially put on the map after winning a gold medal at the Great American Beer Festival, the largest beer festival in the U.S. Since then, it has continued to win many awards, over a dozen to be exact. This marks the 8th international win for Adirondack Lager, confirming it is among the world’s best beers.
“We’re always proud to win awards in any competition, but it is particularly special to win international awards among the world’s toughest beer competitors,” said Fred Matt. “In this case, it’s even more special to win in a German Style category, with competitors from Germany. This really shows off our 125 years of brewing expertise that originated with my great-grandfather, who learned to brew there.”About the competitionÔÇª50 handpicked, international professional tasters including journalists, writers and other industry professionals, judged this year’s Brussels Beer Challenge. The competition had a total of 592 entries consisting of the most acclaimed beers produced in the United States, Germany, Australia, Belgium, Brazil, Cambodia, Canada, Denmark, Estonia, France, Italy, Japan, the Netherlands, the Czech Republic and the United Kingdom. The entries were divided into 8 styles and then sub-divided into 50 categories. Gold, Silver, and Bronze medals were awarded, as well as honorable mention for several categories.

Adirondack Lager is Saranac’s original award-winning beer brewed in the German Lager tradition using Noble hops. The hop bitterness is balanced with caramel malt sweetness, creating the ultimate “round” beer. It’s available year round in 6 packs and draught, and is also available in Adirondack Trail Mix 6 packs and 12 packs.