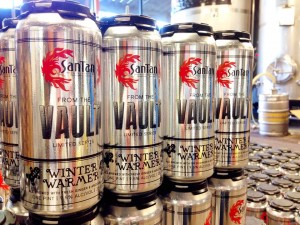 Chandler, Ariz — Winter has arrived in Arizona and so has the official launch of SanTan Brewing Company’s beloved holiday favorite, Winter Warmer. A glass of Winter Warmer tastes how you would imagine a cup of Christmas would be with its spiced aroma, fresh ginger and orange blossom honey flavor. In the pub, Winter Warmer is also served with a warm gingersnap cookie for an extra touch of holiday spirit.

This year, fans are in for an extra special treat. The 2014 Winter Warmer has been conditioned for a minimum of eight weeks creating a bold flavor and bringing the ABV up to 9.5%. It is also the second beer to be released in SanTan’s 16 oz canned Vault Series.

The 2014 Winter Warmer Vault Series is available now on tap at SanTan Brewing Company and in 16 oz cans across Arizona, California and Texas at select bars, restaurants and retail locations — while supplies last.

The Vault Series is a collection of limited release specialty craft beers inspired by the Valley National Bank’s iconic vault, which still remains at SanTan Brewing Company’s downtown Chandler brewpub. All Vault Series beers have a high ABV of 9% or more and are conditioned for a minimum of six to eight weeks. This is SanTan Brewing Company’s first 16 oz canned series.

“The 6-8 week conditioning process is essential for this series due to the high alcohol content. By slowing things down and allowing the yeast to slowly condition the beer we’re able to produce a strong but balanced southwestern style ale,” said founder and brewmaster, Anthony Canecchia.

To find a pint or can of SanTan’s Vault Series beers near you, visit SanTan Brewing Company’s Beer Finder online at www.santanbrewing.com/the-beer/beer-finder.