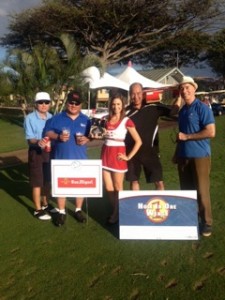 Hawaii — The 16th annual Hawaii Culinary Education Foundation Golf Tournament sponsored by San Miguel Brewery, Matson, Penske, Allied and presented by Young’s Market Company of Hawaii and American Express, did not disappoint with over $35,000 raised in support of the Culinary Institute of the Pacific and high school culinary programs.To date, the Hawaii Culinary Education Foundation has raised more than $467,500 from golf tournaments.

This year’s tournament brought together 130+ industry professionals from around the country such as Chris Kaesman of G.K. Skaggs, Importer of San Miguel beer in Hawaii, Alan Wong of Alan Wong’s Restaurant, Tom Mullen of the Hawaii Culinary Education Foundation and many more teeing up for a great cause.

The day on the Kapolei golf course was spent playing 18 sponsored holes that included exciting prizes along with sampling of gourmet food, paired with an assortment of San Miguel beers. Some of the highlights were Hole #5, Closet to the Pin, sponsored by San Miguel Beer and Murphy’s Bar & Grill, where participants were able to sample a selection of San Miguel beers and at Hole #16, where a $20,000 cash prize was offered as a Hole-In-One contest.

A big Mahalo to all participates for making this tournament a great success!

Known for its refined, smooth and balanced beers, San Miguel has been brewing in Southeast Asia since the late 1800’s. For over 100 years, San Miguel Brewery has been creating top quality beers for drinkers who thirst for the distinctive taste of a classic beer. San Miguel is the largest brewery in the Philippines and one of the world’s top beer producers. San Miguel beer is imported into Hawaii by G.K. Skaggs. Make sure to visit us on Facebook.