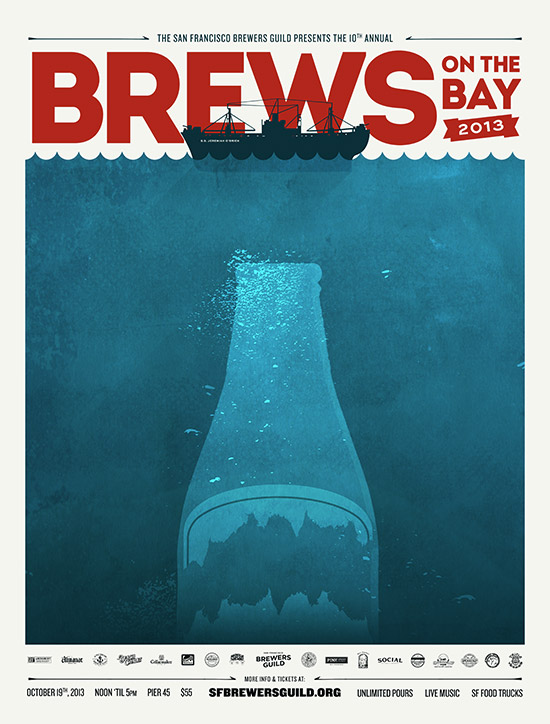 San Francisco – The San Francisco Brewers Guild invites you to celebrate 10 years of Brews on the Bay with us aboard the historic S.S. Jeremiah O’Brien at Pier 45, on Saturday, October 19th, from 2-5pm. Enjoy over 50 different beers made by San Francisco breweries, while soaking up the salty air, sunshine, live music, food, and spectacular views of the Golden Gate Bridge, Alcatraz and San Francisco. Tickets are on sale now for $55 and are expected to sell out.

This year’s event is shaping up to be our biggest and best yet. You can expect our member breweries to serve unlimited eight-ounce pours of their latest and greatest IPA, farmhouse ale, session beer, barrel-aged sour, imperial stout, and many other beer styles. The brewers will also be on hand to answer any questions about our favorite beers.

In addition to the local beer, we’re going to serve up local food and music. Off the Grid has provided us with three of San Francisco’s best food trucks and carts: Ebbett’s Good to Go, Onigilly, and Burr-Eatery. They’ll line the pier to fill your mouth-watering needs for a few extra bucks. We’ve also enlisted The Brothers Comatose to play their lively roots music on the ship’s deck, while The Up & Down will be playing on the pier.

The S.S. Jeremiah O’Brien is a historical landmark from the World War II Merchant Marine era, and a portion of festival proceeds will benefit the National Liberty Ship Memorial.

Brews on the Bay is organized by the San Francisco Brewers Guild, a non-profit 501(c)(6) founded in 2004. The Guild’s mission is to unite those who make local beer with those who love it, and revive the vibrant heritage of beer brewing in San Francisco.

The San Francisco Brewers Guild is happy to extend complimentary tickets to members of the media. A limited number are available, so please contact us soon with your request to ensure attendance.