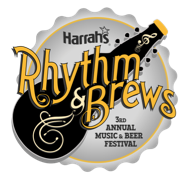 WHAT: The San Diego Brewers Guild (SDBG) continues the tradition of bringing together the best of craft beer at the 3rd Annual Harrah’s Rhythm & Brews Music and Craft Beer Festival along “Hop Highway” in the heart of Vista, California.

This part craft beer, part music festival is larger than ever and will feature 50 craft breweries — both local and national — along with nine musical acts, twice as many as last year. Attendees will enjoy unlimited craft beer samples, continuous live music from three stages and food from local restaurants.

In addition, aspiring brewers can enter the Homebrew contest sponsored by Mother Earth Brew Co. The winning “Best of Show” beer will be brewed on Mother Earth’s production system and featured at next year’s festival. Registration opens April 1st and all entries must be dropped off by April 20th at Mother Earth Brew Co. The winning brew will be announced during an awards ceremony at Rhythm & Brews. For contest rules and details, please go to: http://www.sdrhythmandbrews.com

SDBG will be donating a portion of revenues from the event to the festival’s 501(C)3 charity partner, Relay for Life.

WHY: Previously held in October, Rhythm & Brews is now presented by SDBG as its official spring event. Hosting both Rhythm & Brews in the spring and San Diego Beer Week in the fall gives craft beer aficionados access to their favorite breweries with two major events throughout the year. SDBG’s widely attended 10-day celebration of SD craft beer, San Diego Beer Week, will cap off the year the first week of November.

WHO: Attendees will get to enjoy sounds of blues and jazz from award-winning musicians like James Harman’s Bamboo Porch Revue featuring Nathan James, The Bayou Brothers, Lester Abrams Trio and more.

A complete list of breweries and musicians can be found at: http://www.sdrhythmandbrews.com

TICKETS: Rhythm & Brews is a 21+ event. Ticket prices are below: