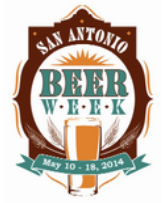 SAN ANTONIO, TX — San Antonio Beer Week (SABW) is a special week dedicated to celebrating beer and the community that enjoys it. It offers an exciting opportunity for small and independent craft brewers and the community of better beer retailers to celebrate the advancing beer culture here in the U.S. For the fourth year in a row, the San Antonio craft beer community will come together in celebration of flavor, independence, and camaraderie. The week kicks off on Saturday, May 10 and runs through Sunday, May 18.

2014 offers a range of exciting events that showcase San Antonio’s growing craft beer culture. Area brewers will be brewing a special collaboration beer, which will be tapped at the different breweries and at events during the week. A commemorative SABW 2014 glass will also be available at glass nights. A special issue of the San Antonio Current will feature the official program for SABW 2014. Featured events will include the opening ceremonies, beer dinners, pub crawls, tap takeovers, educational seminars, and special releases. The capstone event will be the closing ceremonies where all the area craft breweries come together to pour their local beer.

San Antonio Beer Week takes place in conjunction with American Craft Beer Week, which means that breweries and fans from all over the U.S. will be celebrating craft beer in their hometowns. Both beginners and full-fledged beer geek are encouraged to participate, and there will be events for everyone. Local breweries participating include 5 Stones, Alamo, Blue Star, Busted Sandal, Branchline, BS Brewing, Freetail, The Granary, New Braunfels Brewing, Pedernales, and Ranger Creek.

A full calendar of events is available at the San Antonio Beer Week website, http://sanantoniobeerweek.com. Many events are already listed, and more events will be posted up until the opening ceremonies.