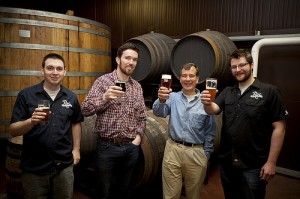 The new beers are Boston Tea Party Saison, developed in collaboration with Jim Woods, brewer and founder of San Francisco-based MateVeza (www.mateveza.com), and ThreeNinety Bock, created in collaboration with Chris Spinelli and Jon Mervine, brewers and co-founders of Roc Brewing Co. in Rochester, NY (http://rocbrewingco.com/). The collaboration beers will have select distribution in California and New York, respectively, and be served in the tour center at the Samuel Adams Boston Brewery.

The beers were the culmination of the two microbreweries’ participation in the Samuel Adams Brewing the American Dream Brewing and Business Experienceship, which like an extended internship, provides one craft brewer annually with hands-on educational and enrichment experiences, and is tailored to the awarded brewery’s business needs. The Experienceship includes a series of trips to the Samuel Adam’s Boston Brewery for extended coaching from various functional areas of The Boston Beer Company such as ingredients procurement, quality assurance, brewing, and sales and distribution, among others. The program also provides access to and funding for industry events.

“Brewing with MateVeza and Roc Brewing Co. is a terrific example of how craft brewers work together and support each other in the spirit of growing the entire craft beer industry and creating flavorful new beers,” said Samuel Adams founder and brewer Jim Koch. “Jim, Chris, and Jon are extremely talented brewers, and I understand their challenges because I also faced them when starting Sam Adams. I hope that they got a lot out of the Experienceship program. We had a great time brewing together, and I’m confident they’ll continue to grow and succeed as brewers.”

Koch added that the application process is open to up-and-coming craft brewers nationwide who are interested in participating in the 2013 Samuel Adams Brewing & Business Experienceship and currently part of the Brewing the American Dream program. Between now and the end of August brewers can submit applications, which will be judged by a panel of professionals in the craft beer and microlending industries, with a winner announced at the Great American Beer Festival in the fall. Additional information on the application process is available at btad.samueladams.com.

To date, Samuel Adams Brewing the American Dream has provided 11 loans to craft brewers across the country. Some are more established such as MateVeza and Roc Brewing, while others, like Big Shoulders Brewing Company in Chicago, are just starting out. The program has also worked with a variety of small businesses related to craft brewing, including Brooklyn Homebrew in New York that provides brewing equipment and ingredients for home brewers.

Boston Tea Party Saison: Samuel Adams and MateVeza came together to brew a Saison, which is a farmhouse beer traditionally brewed in the autumn or winter for consumption during the summer for the farm workers. The final recipe combines MateVeza’s signature ingredient – yerba mate tea — and Samuel Adams’ one-of-a-kind Kosmic Mother Funk (KMF), a blend of wild yeasts and bacteria designed to give beers unique flavors. The bright and satisfying brew has a slightly earthy and deliciously fruity character with a hint of spice and a long dry finish.

ThreeNinety Bock: The brewers at Samuel Adams and Roc Brewing were inspired by the distance, in miles, between Boston, M.A. and Rochester, N.Y. — hence the name ThreeNinety Bock. At first glance the unconventional Maibock offers an appealing hue of tangerine. At first sip you experience the depth and character of robust bread crust and European malt. The brew has a subtle spice from rye malt and a marmalade sweetness that blends in a hint of smoke for good measure, and a slightly sweet dry finish that is sure to be enjoyed.

First launched in June, 2008 and expanded nationally in 2012, Brewing the American Dream, in partnership with non-profit microlender Accion, has provided more than $2 million in loans to 235 small businesses nationwide, coached 3,000+ small business owners, and created or saved nearly 1,400 jobs. Food, beverage, and hospitality small business owners, as well as craft brewers can apply for loans ranging from $500 to $25,000 to be used for a variety of business purposes, with all loan payments recycled back into the fund.

The Boston Beer Company recently announced the expansion of the Brewing the American Dream program, which includes providing an additional $1 million in microloans to approximately 100 new small businesses and increasing the program’s coaching and mentoring activities for small business owners throughout the country.

About The Boston Beer Company

The Boston Beer Company began in 1984 with a generations-old family recipe that Founder and Brewer Jim Koch uncovered in his father’s attic. Inspired and unafraid to challenge conventional thinking about beer, Jim brought the recipe to life in his kitchen. Pleased with the results of his work, Jim decided to sample his beer with bars in Boston in the hopes that drinkers would appreciate the complex, full-flavored beer he brewed fresh in America. That beer was aptly named Samuel Adams Boston Lager, in recognition of one of our nation’s great

founding fathers, a man of independent mind and spirit. Little did Jim know at the time, Samuel Adams Boston Lager soon became a catalyst of the American craft beer revolution.

In seeking a partner for Samuel Adams’ Brewing the American Dream, The Boston Beer Company turned to Accion to facilitate lending to hardworking business owners seeking to grow. As the largest nationwide micro- and small business lending network in the United States, we connect small business owners with the accessible financing and advice it takes to create or grow healthy businesses. Since 1991, the five members of the Accion U.S. Network have collectively made over 45,000 loans, totaling over $350 million. Additionally, over 400,000 business owners across the nation have turned to Accion for financial and business advice via workshops, online tools, and one-on-one consultations. Globally, Accion (www.accion.org) is a pioneer in microfinance, reaching millions of individuals through its international network of partners. For more information visit us.accion.org.