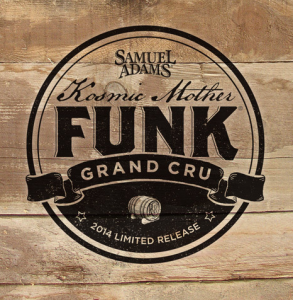 BOSTON, MA— The brewers at Samuel Adams are no strangers to taking time to focus on their passion projects, and the latest example is the 2014 release of Samuel Adams Kosmic Mother Funk Grand Cru. Kosmic Mother Funk (KMF) is a unique Belgian ale, aged in Hungarian oak tuns for over a year and fermented with multiple micro-organisms found in the environment of the historic brewery.

On August 23rd, the Samuel Adams brewers are releasing a small batch version called Kosmic Mother Funk Grand Cru that’s been uniquely aged for two years in the Barrel Room at the Boston Brewery. A touch of Belgian candi sugar has been added to balance the beer’s tart acidity and lend a smoothness and sweetness to the finish. This special brew will debut on August 23rd in San Diego at the 2014 Beer Bloggers Conference, and will then be available on draft in select U.S. cities as part of the Kosmic Mother Funk Grand Cru 12-City Tasting tour, which runs from August through November.

The inspiration for Kosmic Mother Funk is Belgian beer styles and brewing techniques including blending, aging and conditioning beers for wild and flavorful results. The Samuel Adams brewers began by taking a Belgian ale and aging it in Hungarian oak tuns and as time went on the beer continued to evolve and take on a life and character of its own, only to be described as a kosmic collection of flavors. The porous character of the wood allows air to slowly seep into the beer during secondary fermentation, smoothing out any harsh flavors. Wild yeast and bacteria including Brettanomyces and Lactobacillus also interact with the aging brew, imparting unique spicy, fruity and bright tart flavors. Long contact with the wood imparts its own flavors of oak and vanilla. This unique brew was then blended at varying levels into a series of Belgian brews, the manifestation of which became the Samuel Adams Barrel Room Collection.

Originally a French term used to describe wine vintages, when used in the context of beer, ‘Grand Cru’ has come to denote a brew that is the ‘best of the best.’ When crafting Kosmic Mother Funk Grand Cru, the brewers at Samuel Adams aimed to create a unique brew unlike anything they had barrel-aged before. KMF Grand Cru is a wild, funky and complex ale, with a depth of flavors ranging from earthy and spicy to floral and sweet.

What Founder and Brewer Jim Koch has to say about Kosmic Mother Funk Grand Cru: “Kosmic Mother Funk is at the heart and soul of our Samuel Adams Barrel Room Collection, and one of the most unique brews ever to come out of our Boston Brewery. Kosmic Mother Funk Grand Cru is tart and funky, with notes of dark fruit, cocoa, cherry and vanilla, as well as a subtle smooth sweetness. Although KMF Grand Cru may not be for everyone — it’s certainly not your average beer — I believe it is a truly delicious brew that will open many palates and minds to the world of funky beers.”

Following the official release of Kosmic Mother Funk Grand Cru at the 2014 Beer Bloggers Conference in San Diego on August 23rd, the KMF Grand Cru Tasting Tour will visit 12 cities from August through November, with the brew available on tap in select locations throughout each city. The final tour stop will be voted on by craft beer lovers across the country.

For tour dates and to vote for your city as the final stop, visit www.SamuelAdams.com/kmf.

Today, The Boston Beer Company brews more than 60 styles of beer. It relentlessly pursues the development of new styles and the perfection of classic beers by searching the world for the finest ingredients. Using the traditional four vessel brewing process, the Company often takes extra steps like dry-hopping, barrel-aging and a secondary fermentation known as krausening. The Company has also pioneered another revolution, the ‘extreme beer’ movement, where it seeks to challenge drinker’s perceptions of what beer can be. The Boston Beer Company has been committed to elevating the image of American craft beer by entering festivals and competitions around the globe, and is one of world’s most awarded breweries at international beer competitions. As an independent company, brewing quality beer remains its single focus. Although Samuel Adams beer is America’s largest-selling craft beer, it accounts for only one percent of the U.S. beer market. The Boston Beer Company will continue its independently-minded quest to brew great beer and to advocate for the growth of craft beer across America. For more information, please visit www.samueladams.com.