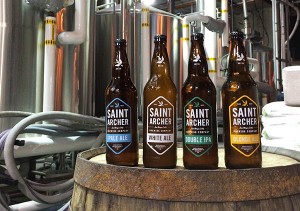 San Diego, CA — Saint Archer Brewing Company is happy to announce that its craft beers netted not one but four medals at the annual San Diego International Beer Festival, the largest beer festival on the west coast.

The award-winning beers for 2014 are:

“I’ve been attending the SDIBF since it started eight years ago” says Yiga Miyashiro, Director of Brewing Operations at Saint Archer. “It’s truly an honor to be recognized four-fold by our hometown experts and beer peers. Even if we didn’t walk away with any hardware we love this festival — it’s half the reason San Diego is now recognized as a brewing hotspot. These guys always do it up right.”

To win four medals in such a prestigious festival after only a year in business is no easy feat. Saint Archer just celebrated its first anniversary in May, and the SDIBF attracts 200+ heavy-hitting breweries from around the world, offering up nearly 400 varieties of ale, cider, porter, stout and more.

“We couldn’t be happier about this result from the San Diego International Beer Festival,” says Josh Landan, President and Founder of Saint Archer. “This kind of recognition for our beers makes all of the hard work worthwhile. We can’t thank the local community enough for the enthusiasm with which they’ve embraced Saint Archer.”

Each year, the San Diego International Beer Festival represents an international collection of more than 400 beers from more than 15 countries, in the format of a public tasting event and private competition. SDIBF brings together the brewers and beers to recognize the best in the industry and highlight new and upcoming breweries in one of the most unique venues in the world. Where else can you taste award winning beers, ride the Ferris wheel, chomp on a turkey leg, explore award-winning exhibits and attend a concert all in the same day?