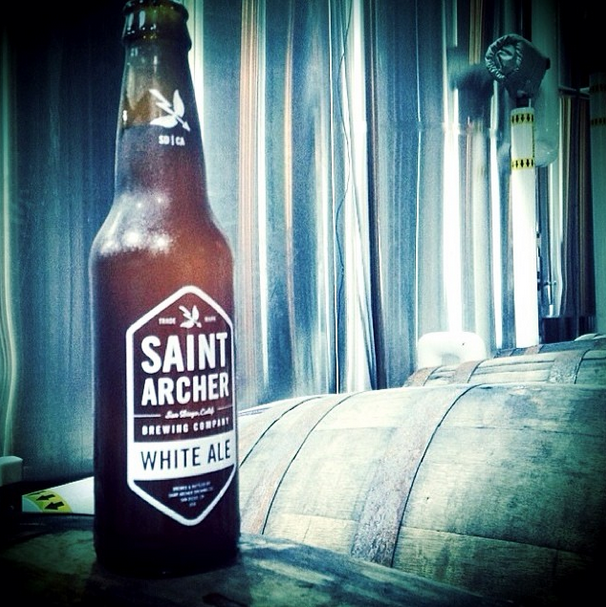 – From the heart of the famous San Diego craft beer scene, Saint Archer Brewing Company is proud to release the White Ale, its fourth beer for full production. This White Ale harkens back to its predecessor in Belgium, Witbier, a popular and refreshing style almost pushed into extinction by the lager revolution of the 19th century. Hardcore beer purists saved the style then and Saint Archer continues the tradition now with this modern update sure to continue the brand’s inroads into America’s fridges.

Saint Archer launched in 2013 with a Blonde/Kolsch-Style Ale, a Pale Ale and an IPA, because those are the styles their Brewers and Ambassadors reached for most often. Their new White Ale stands on the shoulder of giants and benefits from the view.
WHITE ALE BY THE NUMBERS
The first thing seasoned beer fans will notice about Saint Archer’s White Ale is its drinkability and superior mouth feel, silky and sultry. Brewed with premium pilsner and wheat malts, the White Ale exhibits the classic hazy appearance that contributes to the smooth mouth feel and complex flavor profile that Witbier enthusiasts love. Real Belgian yeast, coriander and fresh orange peel provide the refreshingly tart/spicy/fruity orchestration that make White Ale a good call in any season. It’s refreshing enough to quaff on a scorching summer day but interesting enough to sip fireside while you wait for winter to be over.
Head Brewer Kim Lutz is no stranger to the pleasures of Witbier—and has the medals from World Beer Cup and Great American Beer Festival won by her signature Belgian Whites to prove it. Her years in Hawaii experimenting with fresh, local ingredients are also on full display in Saint Archer’s new White Ale:
“As America’s palette for craft beer gains color and dimension,” explains Lutz, “this allows us to go down new and very interesting roads. The low IBU (15) on this beer might scare off fans of sharp IPAs—or beer drinkers who think that ‘good’ is synonymous with ‘bitter’—but I hope they’ll give it a try. This is also a beer that serious wine drinkers might find really interesting; the interaction of the wheat protein, the spice notes and the yeast really give your mouth something to think aboutÔÇª”
About
Saint Archer Brewing Company was founded on a unique strain of creative talent: World-class brewers. Artists and musicians. Surfers, skateboarders, and snowboardersÔÇª. All coming together with passion and commitment to express our collective true love — handcrafted beer. Saint Archer’s been a long time in the tank and we hope you taste our appreciation and gratitude in every sip.