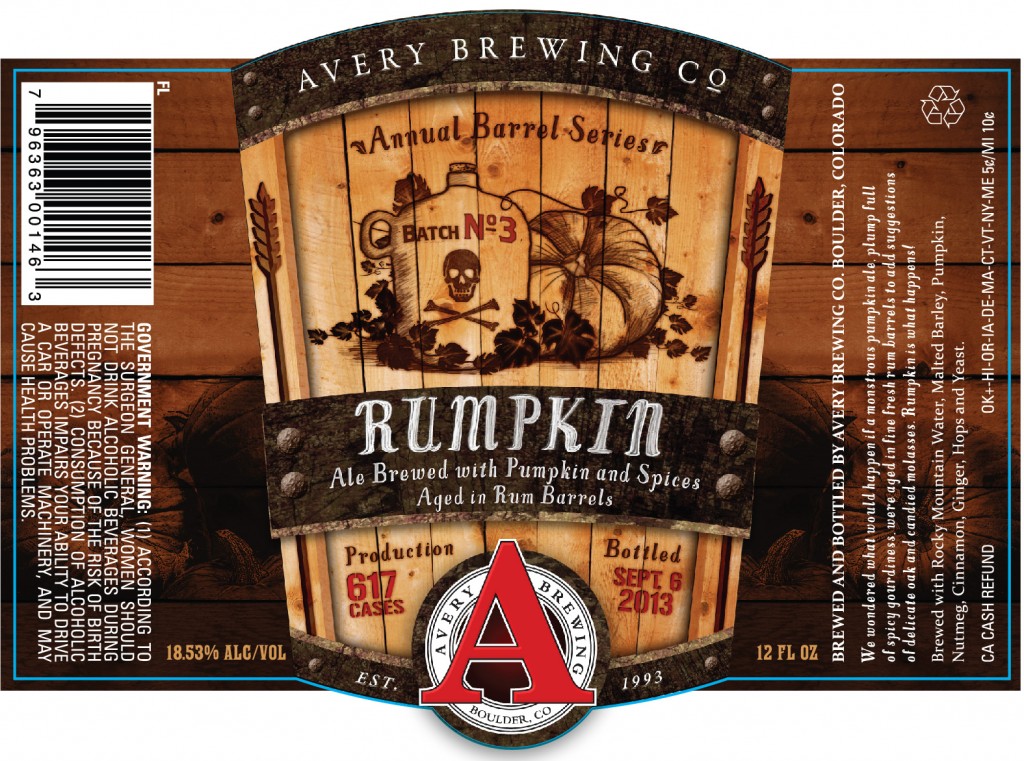 BOULDER, Colo. — Three years ago the brewers at the Avery Brewing Company wondered what would happen if a monstrous pumpkin ale, plump full of spicy gourdiness, was aged in fine fresh rum barrels to add suggestions of delicate oak and candied molasses. Rumpkin is what happened! And on September 22nd it is happening again.

Rumpkin, is an 18.53% ABV rum-barrel-aged pumpkin beer. This year’s Rumpkin was brewed with 600lbs. of hand roasted organic pumpkins from Boulder’s Munson Farms and spiced with nutmeg, cinnamon, and ginger. The beer spent six months in dark rum barrels. Rumpkin was first released on Oct 15, 2011, and was the first member of the Annual Barrel-Aged Series that also features Uncle Jacob’s Stout and a third yet to be determined beer.

“I love this beer because it is its own monster,” said Adam Avery. “It certainly fits in the pumpkin beer category, but this beer is something different. Although Rumpkin is huge, nothing sticks out too far. You get subtle flavors and aromas from the pumpkin, from the rum, and the spice. Altogether the flavors marry to make a really complex beer.”

“Pumpkin beers are all about the spice. That’s what you taste. You get mainly aroma from the gourd, maybe a little flavor. It’s super important you get the spice right. It’s easy to go overboard.”

Avery Chief Barrel Herder Andy Parker agrees. “Overspicing is an easy thing to do. Add too much spice and you lose a lot of the malt character, the rum, even the pumpkin. It’s also easy to make the assumption that more time in the barrel equals a better beer. Having brewed this one a few times now, we have determined that six months in the barrel is about perfect. It’s in there long enough to pick up the barrel character, but not so long that it suffers from too much oxidation. We are definitely dialing this one in.”

Only 617 cases of Rumpkin were produced. The Avery Tap Room in Boulder, CO, will host the release of Rumpkin, starting sales at 5pm on Sunday, September 22nd, 2013. Bottles are 12oz. and will be sold as singles at $12 each. Fans will be able to buy up to case, so this is everyone’s chance to build their cellar. Availability can only be guaranteed at the Avery Tap Room during the release party until the beer runs out. The line party will start at 11am and will feature rare beers and Tap Room exclusives.