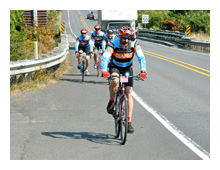 NEWPORT, OREGON – John Maier’s Beard Tour started in Seattle on June 21st at the AHA Convention. It made personal appearances at the Issaquah Brewhouse, the Latona Pub, and a speech at the Gala Rogue Dinner prepared by Chef Sean Paxton that paired three courses with Rogue Mocha Porter, Chatoe Rogue OREgasmic Ale and XS Old Crustacean Ale. Also made especially for the event by John Maier was the commemorative beer Wry Smile Rye IPA.

The Beard’s next appearance will be at the Oregon Brewer’s Festival Breakfast and March on July 26th. On Friday July 27th the Beard will be seen at McMenamins Edgefield for the Sasquatch Brew Am Golf Tournament.

Some days John’s Beard is on display in Newport as part of the regular brewery/distillery tours. Reservations suggested.