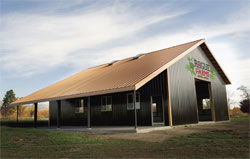 The Heritage-Estate Facility is located on the Barlow Trail at the Basque Ranch, adjacent to the 200 acres of malting barley used to create Rogue’s Whiskeys, Ales, Porters, Stouts, and Lagers. The Tygh Valley Appellation, located in the shadow of Mt. Hood, is home to numerous crops, including a variety of orchard fruit.

The farm is also home of the Cascade Red, the first new breed of cattle produced in the U.S. in over fifty years and the only breed ever developed in the state of Oregon. Cascade Red Cattle are a Pinzgauer-Red Angus cross and rely on spent Rogue GYO malting barley grown on the Farm for a large portion of their feed.

The Growers, Farmers, Maltsters, Millers, Mashers, Hoppers, Brewers, Fermenters, Distillers, Smithers, Ocean-Agers and Smokers of the Rogue Nation Department of Agriculture remain committed to saving the terroir of Oregon hops and barley one acre at a time by growing their own.