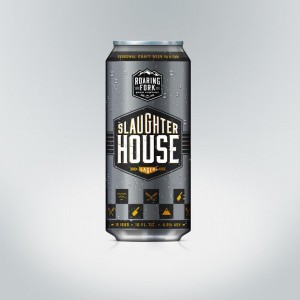 Carbondale, Co — The Roaring Fork Beer Company, a seasonally inspired full production brewery located in Carbondale, Colorado, announces the release of their new summer seasonal with a party to be celebrated the First Friday in June. RFBC’s newest beer to be added to the already six beers brewed since opening the doors this March is the Slaughterhouse Lager. Named after the Roaring Fork’s biggest and most famous rapid, Slaughterhouse Lager is RFBC’s flagship American Pilsner, handcrafted with premium domestic malts and Czech Saaz hops to go down clean and easy while keeping you wanting more.

“I really felt there was a need for a locally produced craft beer that not only could be taken with you on a mountain bike ride or down the river, but was also a style of beer you’d actually want to drink after, or during, doing something physical out in the sun. So, a nice crisp lager, canned of course, was my answer,” says Head Brewer and CEO Chase Engel.

Slaughterhouse Lager will be available June thru November on draft and in 16 ounce cans at restaurants, bars, golf courses and liquor stores valley wide. The Slaughterhouse Lager release party will be celebrated June 6th at RFBC’s tasting room, located at 1941 Dolores Way in Carbondale’s business park. Engel will be tapping the lager at 2pm with a BBQ food truck provided by “Two Dudes Grill Shack” and a live band to be set up in the outside area from 5p-8p.

“I made this beer to fill in a niche that I’ve felt craft brewers have long ignored…American style lagers. Craft breweries tend to avoid them because they are hard to make, take a long time, and you can’t hide technical flaws underneath a massive amount of hops or alcohol. We’re not afraid of any of those things. We want a truly sessionable craft brewed lager as much for ourselves as we do for you and this is it,” states Engel.

RFBC has partnered up with the Roaring Fork Conservancy in an effort to give back to the community by donating a portion of Slaughterhouse Lager beer sales to the 501(c) 3 organization. “It only seemed fitting that we chose the beer named after a river rapid to contribute to the efforts of persevering rivers. The Roaring Fork Conservancy has been very inspiring to work with and as a lover of the river myself, I wanted to choose wisely for this give back,” says Engel.

About the Tasting Room:

RFBC’s tasting room furnishings and signage are the manifestation of craftsman Brad Reed Nelson from Board by Design, who hand built the furnishings from beetle kill pine wood and refurbished barn wood, sourced locally from Distinguished Boards and Beams. Tasting room hours are M-F 2pm-8pm and Saturday’s 12p-6p with tours by appointment. Locally made food bites provided by Craft Catering, are available daily at the tasting room. “Two Dudes Grill Shack” BBQ food truck will be parked on site Thursdays and Friday’s all summer long.

About the Brewery and Brewmaster:

Chase Engel, a long time professional brewer with a dream of producing creative beers to match the changing seasons, launched Roaring Fork Beer Company in 2013. From their home base in Carbondale Colorado, RFBC brews and packages exceptional beers for distribution throughout the Roaring Fork Valley. Dedicated to producing fresh, approachable, and flavorful beers, RFBC continues to push the envelope with experimentation and barrel aging on a small batch scale. Engel has won over 40 National medals and is an 8 time GABF medal winner, his most recent win being a silver for his Belgian Farmhouse Saison with Aspen Brewing Company, in 2012.

The 3,000 square foot brewing facility features a 15 BBL Brewing System; hand crafted in Colorado by Bennet Forgeworks, and will start with a 2,000 BBL Annual Fermentation Capacity. RFBC beers are available in the Roaring Fork Valley in cans and on draft at bars and restaurants that serve craft beer. Roaring Fork Beer Company is the craft beer drinker’s source for ‘better beer.’

RFBC graphics and website are the work of Brett Stiles Design based out of Austin, Texas. Brett is a designer, art director, artist and strategist. Brett is inspired by his son, skateboarding, music, graffiti, table tennis, industrial design and travel. http://www.brettstilesdesign.com