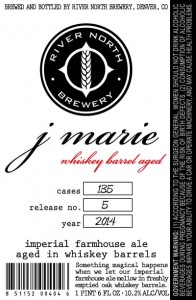 Denver, CO — It’s no secret that River North Brewery likes to experiment with exotic barrels for aging beers, but every once in a while, the brewers return to their roots. On Saturday, November 15th at 1pm, River North will bring back its first barrel-aged beer, Whiskey Barrel J. Marie!

“Shortly after we opened in 2012, we got our hands on some freshly emptied whiskey barrels, and loaded them with our farmhouse ale,” Head Brewer Matt Hess said. “The result not only tasted amazing, but ignited my passion for barrel-aging, and now I look forward to this beer every year.”

J. Marie’s esters of apricot and peach are complimented by toasted coconut and vanilla notes from the barrels, creating a delicate and unique beer that finished at 10.2% alcohol by volume. Enjoy Whiskey Barrel J. Marie fresh or age up to two years.

Both draft pours and bombers-to-go will be available at the taproom release party on November 15th. Bombers will cost $15 with a limit of three. With 135 cases total, more bottles will appear on store shelves in Colorado and Kansas City in the weeks following the release.