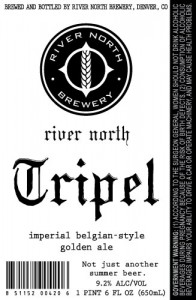 Denver, CO — While other breweries get ready to release pumpkin beers, River North still has a taste for summer.

Rich with notes of apricot, pear and lemon, River North Tripel is perfect for late-August temperatures. Finishing dry on the tongue, this brew is light in body but still delivers the depth of flavor River North is known for.

“This is my kind of summer beer,” head brewer Matt Hess said. “We’ve been dreaming of brewing a beautiful golden strong ale for years. It’s one of my favorite styles, but you have to get it right.”

River North will only release one batch of Tripel. Both draft pours and bottles-to-go ($9) will be available at the taproom release party August 9th. More bombers will arrive on store shelves throughout Colorado the following week, with a few select bars receiving kegs.