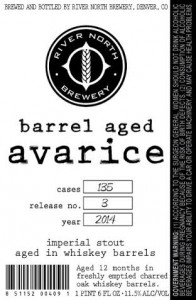 A Belgian-style Imperial Stout aged one year in rye and bourbon whiskey barrels, the 2014 Barrel Aged Avarice release party is set for Saturday, December 13th in the brewery taproom. To celebrate, they’ll pour a three-year vertical of this revered beer starting at 1pm! The 2012 keg, the last of its kind, is the longest-held River North keg in existence.

“As a base beer, Avarice is such a dry imperial stout,” Head Brewer Matt Hess said. “Barrel aging lends the perfect amount of oaky sweetness and balance.”

Bottles of the 2014 vintage will also be available at the release party. Bombers will cost $15 with a half-case limit. More bombers will hit store shelves in Kansas City and Colorado in the following weeks.

Rich with notes of bitter chocolate, toffee and vanilla, this year’s Barrel Aged Avarice finished at 11.5% ABV. Make sure you reserve a couple bottles for your cellar; this beer will develop further in the bottle for years.