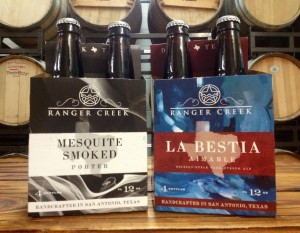 The Mesquite Smoked Porter’s silver medal was won in the “Specialty Beers” round of the World Beer Championships, Ranger Creek entered three beers into the judging competition and came away with three medals. In addition to the silver medal for Mesquite Smoked Porter, they received a gold medal for Small Batch Series No. 5 and a bronze medal for Small Batch Series No. 6. The Beverage Testing Institute’s World Beer Championships, founded in 1994, is America’s oldest international beer competition and is open to all commercially produced beers from around the world. It has seven different tasting sessions per year that cover all the major styles. The styles evaluated in the “Specialty Beers” round included sour beers, smoked beers, wood aged, hybrids, and other specialty beers.

In conjunction with the new silver medal, Mesquite Smoked Porter is also moving from 22 oz bombers to 12 oz 4-packs. The brewery has stopped producing the bombers in favor of the new 4-packs and encourages those that prefer the large format option to stock up since they will no longer be available. While the recipe for the beer has not changed, the carbonation method has. The bombers were bottle conditioned while the 12 oz bottles are force carbonated. This gives the brewery more control over the carbonation level in the beer and eliminates the thin layer of sediment from the bottom of the bottle. The change also allows Ranger Creek to package the beer in kegs and offer it as a regular draft offering, something that was not available with the bombers.

4-packs of Mesquite Smoked Porter will retail for between $8.79 and $8.99. They will be available initially in San Antonio and Austin only, with Dallas/Ft. Worth and Houston to follow. They can be found at the usual fine beer retailers that carry Ranger Creek, including chains like Central Market, select HEB’s, Spec’s, Total Wine & More, WB Liquors, and Whole Foods, along with fine independent stores like East 1st Grocery, Pig Liquors, Sunrise Minimart, and Whip In.