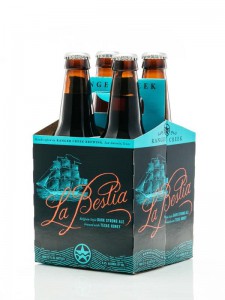 San Antonio, TX, – After a year long hiatus, La Bestia has made it back into Ranger Creek’s beer lineup and onto retail shelves. The former year-round beer has been resurrected as a seasonal that will be available through April. The beer was a fan favorite that was put into hibernation due to lackluster sales and has been brought back due to popular demand.

La Bestia is a Belgian-style Dark Strong Ale that clocks in at 9.4% ABV. It takes its name from the Belgian tradition of naming beers after demonic creatures. The devilishly friendly ale has a rich, complex nose and a body full of rich, dark fruit flavors that will be familiar to red wine drinkers. Texas honey and a well attenuated body in the Belgian abbey tradition make this beer superbly drinkable despite its high alcohol content.

La Bestia pairs well with carbonade, lamb, game and fowl, rich cheeses such as triple-crème and Gorgonzola, as well as decadent desserts like sticky toffee pudding, dark chocolate and raspberry cake, and tiramisu. It is available on draft and in 4-packs of 12 oz bottles with a suggested retail price of $10.99.

Although the recipe of the beer has not changed, the packaging has. Fans of the beer will notice new labels and carriers with updated branding and new colors. 4-packs are now available in San Antonio and Austin at Specs, Total Wine & More, select HEBs, Whole Foods, Central Market, and select HEBs. Special stemmed glassware will be available at draft accounts throughout February and March including Thursday, Feb 18, 5-7 pm at Big Hops Bitters; Tuesday, Feb 23, 7-9 pm at Brass Tap; and Friday, March 4, 6-8 pm at Flying Saucer San Antonio.

Ranger Creek Brewing & Distilling is a combined brewery/distillery handcrafting beer and bourbon in San Antonio, TX one batch at a time. They are the first modern microbrewery in San Antonio, one of a few combined brewery/distilleries in the U.S., and the only combined operation making both beer and bourbon. They focus on interesting recipes and use local ingredients from the state of Texas as much as possible. The company uses much of the same equipment to make both beer and bourbon, which is possible because in order to make bourbon, beer must be made first. They encourage visitors to San Antonio to sign up for one of their regularly scheduled tours and come by for a visit.