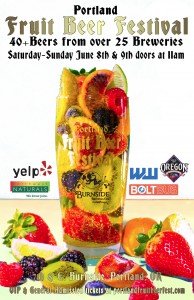 PORTLAND, Ore. — Returning for this year is the Pre-Fruit Beer Fest Homebrewers Dinner and 1st annual Pig Roast on Wednesday June 5th this time held at our friends East Burn up the street. This unique beer and food event pairs some of the best fruit homebrews entered into the annual PFBF homebrew competition with the pro brewers.

This year special industry guests are Steve Wagner the President of Stone Brewing Co. and original brewer who went back into the brewhouse to create Ruination IPA – Tropical Heat Edition just for the Fruit Beer Festival. Also meet The Commons Brewery team who will present a sneak peak at their Bier Royale a sour spelt beer with black currants. Burnside Brewing Co. will present a special version of their new Baltic Porter that has been aged in Rum barrels with blueberries, golden figs, mission figs and dates. These pros will be joined by top homebrew contestants from this years fest and their beers on tap so that you may combine all side-by-side. For dinner the Chef at East Burn has prepared an amazing meal centered around a pig roast. All this for only $40. Reserve your seats now.

Alameda Brewing: Alamosa
The Alamosa is a pilsner with orange juice added. Just think about the early morning Mimosa. At 4.8% this will be the perfect beer to drink on a hot summer day, with the added bonus of some Vitamin C

Bushwhacker Cidery/Upright Brewing: Collaboration Blend
A blend starting off with Upright Brewing’s Six a dark farmhouse rye beer that was then aged in wine barrels with Brett (wild yeast) and currants. It was then mixed 50/50 with Bushwhacker Cidery’s Hazelnut Rum barrel Rose Hip cider. The blend was then added to a Big Bottom whiskey barrel, where it will only sit for about a week before kegging.

Deschutes Brewery: Currant Event
Sour Baltic Porter. First we kettle soured a small batch of our Imperial Porter with our house lactic culture. Then we added Black Currants and blended it with a Baltic Porter conditioned with pureed raspberries The result is a dark, fruited, tart glass of something eventful! ABV: 7.7% IBU’s: 21

Falling Sky Brewing: Strobilus Berry Wheat Bitter
Looking for a summer pink drink? Overlapping berry character from a blend of raspberries and boysenberries provides a refreshing tartness and brilliant color balanced by a touch of malt and wheat sweetness.
Malts: Crisp Pale & EuroPils, Best Malz Wheat, GW Org Wheat, and Castle CaraGold.
Hops: Calypso; finished with Meridian and Calypso
Extras: Oregon Grown Raspberries and Boysenberries
Vitals: OG 1.047 18 IBU 4.5% Alc
Fort George Brewing: Forbidden Wonder Fruit Ale
For this year’s Fruit Ale Festival, Fort George decided to make a kiwi caramel beer. Kiwis are known around the world by many names, but our favorite is the Chinese translation – “”Wonder Fruit.”” We made this caramel ale with Wyeast’s “”Forbidden Fruit”” yeast, infusing a sublte raspberry flavor. The Forbidden Wonder Fruit Ale has a lighter body that won’t distract the pallet from the layers of flavor that glide over the tongue. Even with all of these great ingredients and flavors mixing together, the Forbidden Wonder Fruit Ale is not overly sweet, making it a beer that everyone can enjoy on a hot summer day. 6.7% ABV

Lompoc Brewing: Cherry Wheat
A wheat ale brewed in August 2011 with 200 pounds of sour cherries and then aged in Maryhill Winery Port barrels for 2 months. It has a slight oak aroma with a crisp cherry flavor, finishing slightly tart. 5.0% ABV

Oakshire Brewing: Elderberry Gose
A traditional gose style beer with coriander and salt, with the addition of elderberry. 4% abv.

10 Barrel Brewing: Cucumber Crush
Once again 10 Barrel gets fresh! Tonya took her award winning Berliner Weisse and added loads of cucumbers. The aroma is undeniably cucumber. The flavor is like biting into a crisp baby cucumber fresh from the garden. Just when you have had enough the tartness acts as a pallet cleanser leaving you ready for the next sip. Eat Beer! 4% ABV 17 IBU

2 Towns Ciderhouse: Made Marion
The sunrise of summer, the Made Marion is a blend of Oregon grown Marionberries and hard apple cider. Ripe berry flavors and a crisp apple bite combine with a rich ruby color to make this delicious cider. 6.9% abv.

Rare & Rotating Taplist
(only 2-4 of these beers on tap at once. Tastes 2-4 tickets each)

Lompoc Brewing: Scarlet Red
Our Proletariat Red has turned a rich shade of scarlet after fermenting in Heaven Hill Bourbon barrels with 45 pounds of sour cherries. This beer puts a new twist on our classic, balanced NW Red ale. Now a slightly tart, oaky red, it is complimented nicely by the aroma of a quality Kentucky Bourbon. 6.2% ABV

Lompoc Brewing: Peach Wheat
Brewed in September 2012 and fermented in Heaven Hill Bourbon barrels with 200 pounds of peaches for a strong peach aroma and hints of oak that finishes slightly tart. 5.8% ABV

New Belgium Brewing: Pluot
Hook up a plum with an apricot and they’ll make you a pluot. This sweet hybrid fruit is as refreshing as it is strange, and it’s the perfect starting point for our new Lips of Faith beer. Pluot Ale pours a bright, light golden. The aroma is full of fruit tones and distinct esters from blending the funky brettanomyces and our house Belgian ale yeast. The flavor carries the same weight, adding a spicy, vinous subtlety to stand up against the malt backbone. To build a beer around this worldly fruit is purely Belgian in imagination. Pour some Pluot and enjoy!

It’s not too late to purchase advanced General Admission tickets to skip the lines and also the soon to sell-out VIP admission. VIP admission gets you in one hour early on Saturday June 8th at 10am plus 3 extra tickets and the first chance to try our opening very rare taplist.

The Fruit Beer Fest is still seeking OLCC certified volunteer pourers. Drink for free or for pay in exchange for pouring beers at the fest! Email hollyemerywalen@gmail.com to sign up.