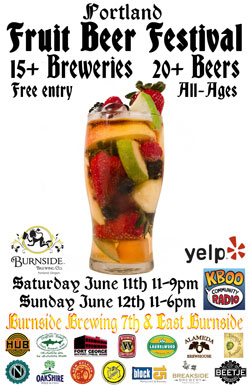 Portland, OR – The Portland Fruit Beer Festival, scheduled for June 11th and 12th, has announced the primary 15 beers and breweries that will occupy the outdoor beer garden.

The event, which takes place at 7th and E. Burnside, will feature fruit beers that represent some of the best U.S. craft brewers have to offer. A majority of the beers highlight the talents of local brewers Hopworks Urban Brewery and Upright Brewing as well as neighboring Northwest brewers Ninkasi and Oakshire (both from neighboring Eugene, OR).

The festival also welcomes two out-of-state breweries in Dogfish Head and New Belgium. Dogfish Head will be serving up their mouth puckering Festina Peche, a Berliner-Weisse made with real Peaches. New Belgium will be debuting ‘Oh La La,’ a raspberry beer.

The beer list represents a creative mix of styles, techniques and fruits and even a few hop-forward offerings. Alameda Brewing’s Huckleberry Hound (a version of their Yellow Wolf Imperial IPA with added Huckleberries and Breakside Brewery’s Mango IPA are also featured on the list.

The festival is an all-ages event with no admission fee. Also for sale at the event will be a selection of natural juices and beer-infused ice creams as well as food from Tastebud and Burnside Brewing’s outdoor BBQ.

For more information and updates on our rare beer tapping, you can follow @FruitBeerFest on twitter and on Facebook. All other details and information can be found on our Webpage.

Breakside Brewing: Mango IPA
Our flagship IPA brewed with a twist: we tweaked the recipe on our best selling beer to suit it to the flavors of fresh mango. Mango additions in the mash, kettle, hopback, and conditioning tank allow this otherwise-mellow fruit to complement and enhance the Citra, Cascade, and Ahtanum hop profile of this IPA. OG: 1.063 FG: 1.010 ABV: 6.8% IBU: approx. 55

Burnside Brewing: Gooseberry Berliner-Weisse
A slightly tart wheat beer with a mild fruitiness. This brew is lowly hoped and fermented with a lactic bacteria in addition to the German ale yeast resulting in the slightly sour finish. A percentage of this beer was put into french oak barrels and aged with 50 pounds of Washington grown Gooseberries. ABV: 3.35% IBU’S: 2.1

Dogfish Head: Festina Peche
A refreshing neo-BerlinerWeisse fermented with honest-to-goodness peaches to (get this!) 4.5% ABV! Because extreme beers don’t have to be extremely boozy!

Fort George Brewing: Badda BOOM! Cherry Stout
Coming in at 6.9% ABV, rich and dark as a moonless night in the orchard, Badda BOOM! has 40 pounds of raspberries and Cherries mingling famously with the Belgian yeast esters and black barley bitters.

Oakshire Brewing: Blind Date
An Oat Brown Ale made with Organic Dates.
Blind Date is a medium bodied Belgian Brown Ale with a balanced bitterness from Calypso Hops. It is crafted with juicy Organic Dates. It has hints of fruit, a touch of roast and a smooth silky texture from the oats. The beer finishes with a mild sweetness from the dates. 6% ABV.

Upright Brewing: Barrel-Aged Pure Wit with Orange
A single cask version of our seasonal Belgian-style wit with a pound of dried sweet orange peel added to the barrel. This tart and hazy wheat beer has a tremendous nose but remains light and snappy on the palate. 4.5%