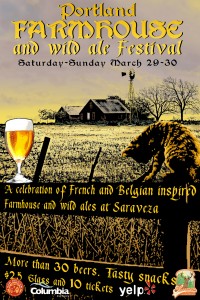 Portland, OR – The resurgence of Farmhouse style ales is being embraced in Oregon like never before, making our state the ideal destination for the 2nd Annual “Portland Farmhouse & Wild Ale Festival”. The Festival takes place on Saturday and Sunday, March 29th and 30th at Saraveza, Bad Habit Room and the street outside of both venues on N. Michigan Avenue.

Farmhouse ales are among the most rustic and approachable of beers. Originally created by farm workers in Belgium & France, they were brewed using local ingredients and naturally occurring yeast from the surrounding terroir. Often brewed to be enjoyed during or after a long work day, these ales ranged from light and citrusy to amber and spicy. The “Portland Farmhouse & Wild Ale Festival” celebrates the traditional drink of workers everywhere and the rise in popularity of American Farmhouse and Wild Ales.

For three weeks leading up to the Festival, New Belgium Brewing will be tapping a different blend of “Love’s Leopold”, an American Wild Ale aged in Leopold blackberry flavored whiskey barrels. These weekly “Pin Parties” will take place onWednesday March 12th, 19th & 26th at 6pm and promise fun times and your chance to taste these excellent rare brews.

Organizers are happy to announce The Ale Apothecary’s special bottled-only beer produced exclusively for the Festival. The table sour ale is a single-barrel vintage of The Beer Formerly Known As La Tache that was aged in an Oregon Spirit dark rum barrel with thirty pounds of white peaches. Only 250 bottles were produced. We will both be pouring and selling unopened bottles exclusively at the Festival and Saraveza.

This year’s festival features Saisons, Biere de Gardes, Brettanomyces Ales, Oak-Aged and Spiced Ales from local breweries such as Upright Brewing, The Commons and Logsdon Farmhouse Ales, as well as nationally recognized breweries: Jolly Pumpkin, Crooked Stave and Ommegang. With more than 50 different beers from over 25 different breweries, this aims to be the largest festival dedicated to American interpretations of the Farmhouse style.

Cost: Presale entry now available. $25 entry includes 10 beer tickets and a commemorative tasting glass. Choose from 30+ Rotating Farmhouse and Wild Ales. There is a $1 processing fee for purchasing your entry online. This is a ticketless entry – your purchase will be recorded on a will-call list. Additional entries and beer tickets can be purchased at the door (cash only). All ticket holders must be 21 years of age or older and are required to show photo ID at the door. Minors are welcome in designated areas until 9pm when accompanied by an adult. Service animals only please.